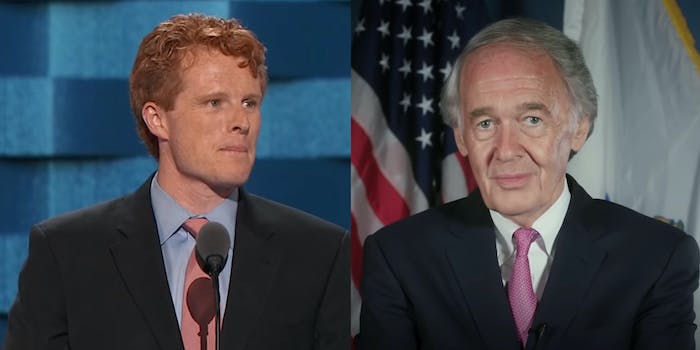 The band's tweet about a campaign event is getting ratioed.

The Dropkick Murphys are being urged to support Sen. Ed Markey (D-Mass.) instead of backing his Senate challenger after the band announced it would be participating in a campaign event for Rep. Joe Kennedy (D-Mass.).

Markey and Kennedy have been in one of the most public Democratic primaries in 2020, with Kennedy running against the longtime lawmaker.

However, Markey has suddenly found himself with a legion of support from the internet that has left Kennedy frustrated. Those online supporters have come out yet again after the Dropkick Murphys announced they’d be part of a Kennedy campaign event.

“A few of us are planning on hanging at the studio Saturday & it’s the 1st day of Early Voting in Mass so our friend @JoeKennedy who’s running for Senate will be stopping by to talk about his campaign & we’ll be streaming a few acoustic songs for you,” the band tweeted on Wednesday afternoon.

Since posting that tweet, the response hasn’t exactly been supportive. As of Thursday morning, the Dropkick Murphys tweet had 1,200 replies compared to just 373 likes.

A lot of the comments urged the band to instead support Markey, while others were aghast at a punk band supporting a politician from a legacy family.

The response to the Dropkick Murphys’ tweet echoed a similar Twitter-based campaign to have Broadway stars back out of a “Broadway Sings for Joe Kennedy III” campaign event earlier this summer.

The push worked, as the event was canceled after stars decided to bow out of the fundraiser after hundreds of Markey supporters highlighted the senator’s legislative record. Other tweets were less kind.

In a late-July debate, both Kennedy and Markey were asked about the tweets to the Broadway stars. Kennedy criticized the online supporters, complaining that one of them tweeted that “bullying works.”

Apparently Markey supporters have taken the message to heart.

The Massachusetts Democratic primary is Sept. 1, with a recent poll showing the race is extremely tight.