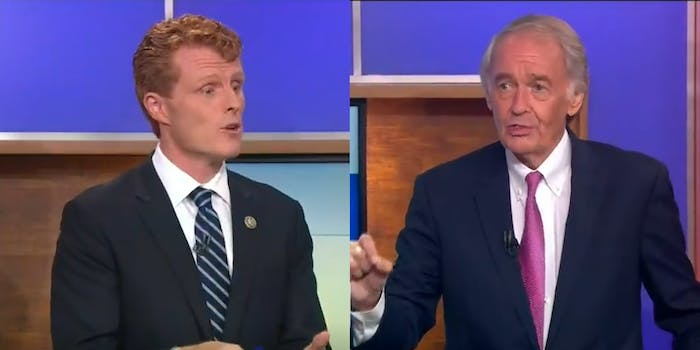 Markey is leaning in to his online fandom.

On Wednesday, the Massachusetts senator posted a TikTok with the song “Rich Girl” by Hall and Oates that showed a montage of news articles highlighting Kennedy’s polling lead over the incumbent senator dropping over the course of the race.

The TikTok then shifts to a negative ad blitz by a Super PAC supporting Kennedy, one that is reportedly backed by Kennedy’s family.

The negative ads and Kennedy-backed Super PAC were brought up during a debate between the two lawmakers on Tuesday, and the TikTok ends with audio of Markey grilling Kennedy during the debate about the ads.

During the debate, Markey continued to press Kennedy on asking his father to stop the ads. Kennedy sidestepped and just said that he has “publicly” said he didn’t want negative ads.

In case you need a refresher, “Rich Girl’s” lyrics go: “You can rely on the old man’s money.”

Markey captioned the TikTok with “I love this song” and named the audio “Free advice for Joe Kennedy.”

Markey’s TikTok had been liked more than 13,000 times as of Thursday morning.

The Massachusetts senator, known for championing the Green New Deal and net neutrality, has amassed a passionate online fan base during his fight against Kennedy.

That fan base was brought up during a debate last month, where Kennedy blamed a “Broadway Sings for Joe Kennedy” fundraiser being canceled on Markey’s online supporters “bullying” stars who were set to attend.

The theater stars scheduled to take part in the event were flooded with tweets from people highlighting Markey’s legislative record and asking them not to support Kennedy. Soon, several of them dropped out.

When Kennedy launched his campaign to unseat Markey, he had a wide lead in the polls. However, a poll released on Wednesday from UMass/Amherst, found Markey leading Kennedy 51 percent to 36 percent.