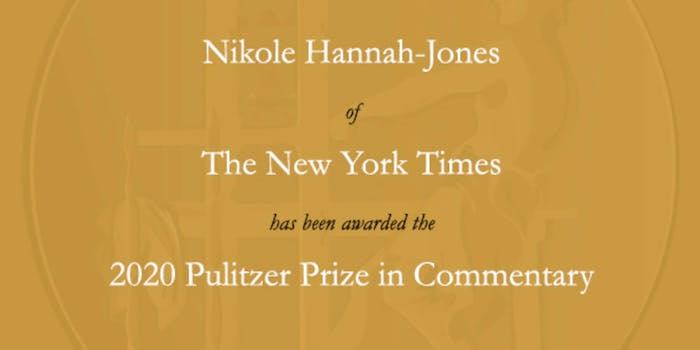 They're saying it's a 'rewriting of American history.'

After the New York Times‘ “1619 Project” won a Pulitzer, conservative pundits flocked to Twitter to express their displeasure with the award.

“The goal is to mainstream the rewriting of American history and philosophy as a garbage heap of evil—not as a corrective to whitewashed traditional history, but as a complete replacement of it,” right-wing political commentator Ben Shapiro wrote in a tweet.

Claims of “errors” in the “1619 Project” appear to be the basis for much of the outrage. Others think that the project is left-leaning.

“You know, I know, and everyone else knows: nothing full of as many shoddy errors and untruths, and subject to such withering scholarly rebuttal, as the 1619 Project would be awarded such an accolade if its politics were of the right rather than of the left,” Twitter user @baseballcrank wrote.

Disdain for the press is also a source of displeasure with the award’s recipient.

“Journalism awards are little more than a circle jerk of impotent little bitches lifting each other up to keep the appearance of relevancy when they have no relevance,” Twitter user @thealexvanness wrote.