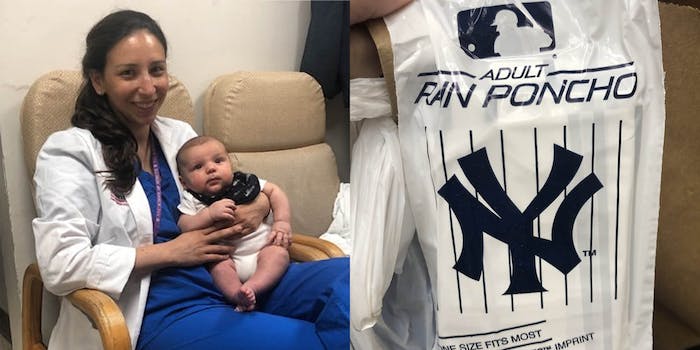 She blames the feds.

In a viral tweet, a doctor claims that she was given a New York Yankees rain poncho to wear as personal protective equipment (PPE) for her shift at a New York City hospital yesterday.

“I’m a physician at a hospital in NYC and THIS IS THE ‘PPE’ I WAS JUST HANDED for my shift. Our federal government has completely failed its health care workers. #GetUsPPE,” @racheljulie tweeted yesterday evening, along with a photo of the rain poncho. Her profile states that she is an obstetrician-gynecologist.

Healthcare workers, many of them in New York City, the epicenter of the nation’s coronavirus outbreak, have been extremely vocal about the lack of PPEs. #GetUsPPE has become a rallying cry on social media.

Many blame the federal government for failing to adequately prepare for the virus and then bungling its response.

“Very sad to see,” said @cz_binance. “Incompetent leaders will cause many more lives to be lost than necessary. It’s really life and death.”

In response, President Trump supporters flocked to the tweet to allege that the blame was more properly placed on anyone but the president and the federal government.

“Why do you expect the federal government to provide you ppe at a hospital they don’t run?” @woodgravers retorted.

In the midst of the nation’s scramble to provide hospitals with supplies for the pandemic, yesterday Politico reported that the coronavirus task force led by Vice President Mike Pence contacted Thailand to plead for PPEs last week. Apparently, unbeknownst to Pence, a shipment of PPEs was en route from the U.S. to Bangkok.

The shipment was put on hold. The administration has since ordered a moratorium on all shipments of protective gear.

To date, there are 164,000 confirmed cases of coronavirus in the United States; more than 43,000 are in New York City alone.