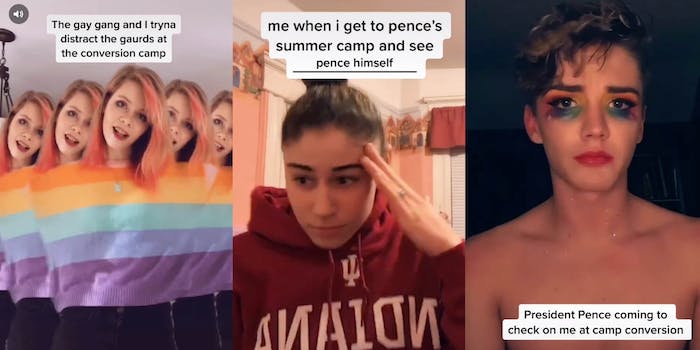 LGBTQ+ teens are TikToking their anxiety over a potential President Mike Pence.

Thanks to President Donald Trump’s impeachment, there is a non-zero chance Americans could see Pence step into the role.

And faced with the possibility of a president who has pushed for discriminatory laws against LGBTQ people, teens are approaching the prospect with humor and no small amount of cynicism. Two hashtags, #Pence and #MikePence are now trending on the platform. Users are employing the hashtags to share videos poking fun at their fear of conversion therapy, gay camps, and, given the latest news with Iran, the draft.

Several popular formats are taking the lead in the meme. One popular video circulating on TikTok uses a Taylor Swift song to really drive its point home. Uploaded by user @b.caèlyn, it shows a teen taking a “state test after the impeachment.”

Upon reaching the final question—regarding sexuality—the user answers “yes” to being LGBTQ+, just as the chorus to Swift’s Should’ve Said No comes in.

The idea, in various formats, has been making the rounds.

You guys are gonna yell at me

A consistent entry in the President Pence TikTok trend features audio from user aaronjohn120. The simple audio, only 11 seconds long, begins with a knock at the door, followed by an assertive voice saying “open up, it’s the police.” The subjects of the videos, often seen fixing their makeup or attempting to hide some essentially “gay” aspect of themselves, then answer in the negative.

When the police ask “why not?” the subjects respond with “you guys are gonna yell at me.”

Many of the President Pence TikToks poke fun at the idea of gay camp in the first place. Dozens of trending videos feature teens breaking down how a typical summer camp works, and how poorly a similar structure would translate to gay camp. Separated by gender? No complaints here.

Regardless of how things with impeachment work out, the teens of TikTok are alright.