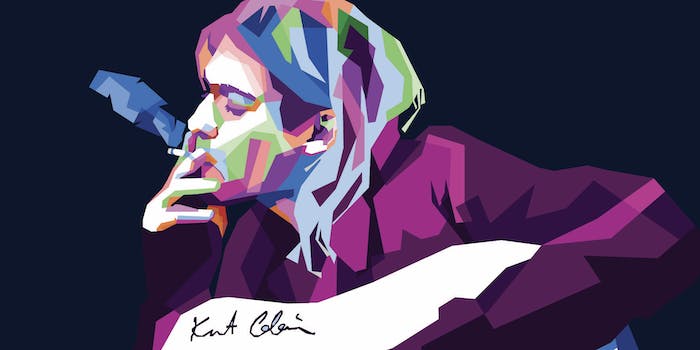 Thanks to AI, there’s a new Nirvana song—but is it any good?

Some fans were well, whatever, never mind.

Through the magic of artificial intelligence (AI) and the vocal stylings of the singer for a Nirvana tribute band, there’s a “new Nirvana song” that seeks to replicate the sound and feel of the beloved alternative music band.

According to Rolling Stone, the song, titled, “Drowned in the Sun,” is part of a project called the Lost Tapes of the 27 Club, a project “featuring songs written and mostly performed by machines in the styles of musicians who died at 27.”

Nirvana’s Kurt Cobain died on April 5, 1994, of an apparent suicide at just 27; Jimi Hendrix, Jim Morrison, and Amy Winehouse are also famous musicians with dedicated fan followings who died at that early age.

The project is spearheaded by Over the Bridge, a Toronto-based organization that provides assistance to people within the music industry who are struggling with mental illness.

“Drowned in the Sun” was created using AI software, and utilizes the quiet-loud-quiet formula that Nirvana utilized in a number of its songs—a style that Cobain himself owed largely to Pixies, another iconic alternative band of that era.

The publication also highlighted lyrics like, “The sun shines on you but I don’t know how,” and what is called “a surprisingly anthemic chorus” including the lines, “I don’t care/I feel as one, drowned in the sun,” remarking that they “bear evocative, Cobain-esque qualities.”

Eric Hogan, who fronts Nevermind, an Atlanta-area Nirvana tribute band, handles the vocals, but the project creators maintain that everything else in the song comes by way of computer.

How is it being received? A few curious listeners responded to the magazine’s tweet about the song, and many were well, whatever, never mind about it.

Twitter user @TheNolaChick assessed that it was “awful” and a “crappy Cobain impersonation.”

Neil Turkewitz went full Comic Book Guy, opining, “A perfect illustration of the injustice of developing AI through the ingestion of cultural works without the authorization of [its] creator, and how it forces creators to be indentured servants in the production of a future out of their control,” adding, “That it’s for a good cause is irrelevant.”

And Twitter user @abastilleheart said simply, perhaps factoring in Cobain’s far-reaching skepticism, “I feel like Kurt would have hated this.”

At least one person reported being a fan of the song, though, commenting, “‘Drowned in the Sun’ got that hook tho.”