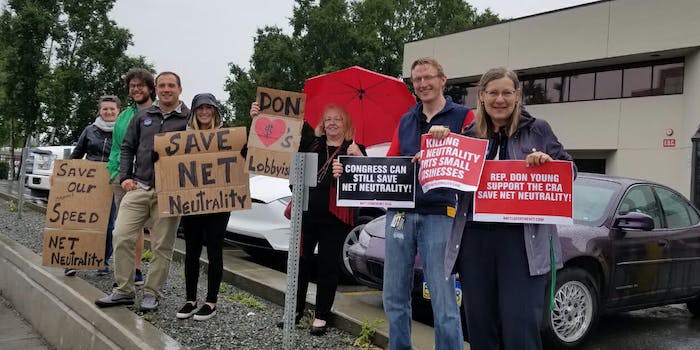 A protest was held outside his Alaska office after he said he would not sign the net neutrality discharge petition.

Several constituents of Rep. Don Young (R-Alaska) gathered outside his office in Alaska earlier this week to voice their displeasure following his announcement that he would not sign a discharge petition that would save net neutrality rules, despite one woman saying he promised to.

The issue of net neutrality is important to them as small business owners, they all told the Daily Dot in several phone interviews this week, and Young’s decision was enough for them to gather outside his office, in the rain, and hold up signs pleading with him to reconsider.

The protest was organized after Jennie Stewart, the owner of CustomMousePad.com, met with Young in June and said the congressman gave her a “verbal commitment” that he would support the efforts to save net neutrality. Later, he announced that he would not sign a discharge petition–the first mechanism needed before the House can vote on a Congressional Review Act (CRA) effort that would overturn the Federal Communications Commission‘s (FCC) decision to rescind the rules.

The CRA would need a simple majority to pass in the House. It would ultimately need to be signed by President Donald Trump.

At one point, Stewart said, the congressman told her: “I don’t know why anybody would vote against this.”

In response to Stewart’s claims, Young’s office released a statement that said he would not sign the discharge petition, and preferred net neutrality be solved “by an act of Congress.”

His office added that a net neutrality solution should take into account the “unique needs of Alaska, particularly our rural and remote communities.”

Several constituents who attended the protest on Wednesday said they thought his statement did not reflect what Stewart said happened in their June meeting, and they felt “disappointed” the congressman didn’t take a stand and become one of one of the first Republicans to support the CRA effort.

Some of the signs at the protest read “Save our internet speed,” and “Congress can still save net neutrality,” while others specifically targeted Young, asking him to support the CRA.

Julie Olsen, the owner of OfficeTech, criticized what she saw as a reversal from his comments to Stewart and the state of politics.

“I hate to say it, but this is typical oftentimes,” she said. “It’s a shame.”

She added that she felt Young had an “opportunity” to show “leadership” on the issue of net neutrality ahead of other Republicans who have yet to voice support for the discharge petition or the CRA.

Olsen said for Alaska, net neutrality is vital to the success of their economy which is largely dependent on small businesses. The internet, she said, allows for them to sell products and reach customers in rural areas of the state.

Without net neutrality protections, she said, internet service providers could “discriminate,” and potentially cripple the state’s economy. During the protest, several people driving by seemed to agree, she said.

JoMarie Thomson, the owner of Crucible Designs, said when she heard of Young’s decision not to sign the discharge petition, she decided to join the group and protest.

“Hearing that he had gone back on his decision to Jennie just got under my skin,” she said. “I didn’t expect him to sign it to begin with, but when I heard he went back on it, I just thought ‘darn it, I can take an hour and go out and stand in the rain.'”

As for the need for net neutrality protections, Thomson said her “entire business” is on on the cloud, and without it, she fears that there could be consequences around internet service providers being able to “slow down” or “speed up” certain internet traffic.

Thomson also criticized the idea, supported by Young, of a legislative solution when the CRA is already in the works.

“Both Lisa Murkowski, Dan Sullivan, and Don Young have all said they support the concept of an open internet,” she said. “What they are not understanding is how fast that’s going to go away without signing the CRA. They want to do it legislatively, but that’s going to take too long.”

“Contrasted with Murkowski who does seem like she is responsive and you can have a voice, and maybe she doesn’t always do what you want … I guess I haven’t felt quite as much that [Young] is as quite responsive in my experience, it’s quite disappointing,” he said.

Young’s constituents aren’t the only ones criticizing his decision. Following Stewart’s decision to go public with the details of her meeting with the congressman, a number of internet rights groups also blasted the decision, with one group calling the statement “outrageous.”