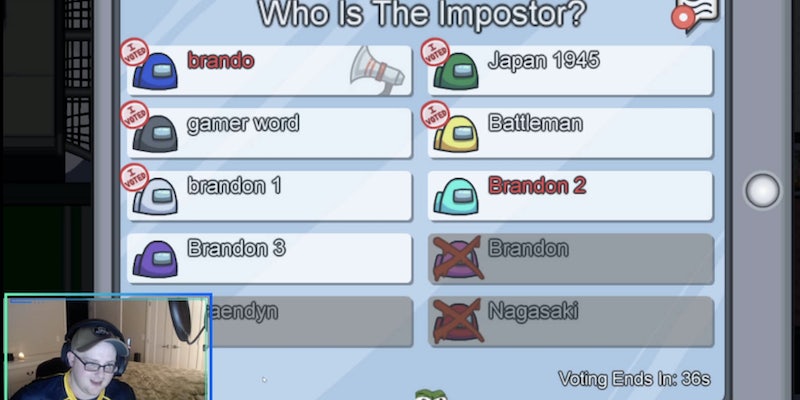 'We had some more colorful ideas, but we wanted to keep it a little tame.'

The U.S. Navy Twitch account is getting flamed online after streaming a game of Among Us on Saturday, featuring offensive and racially insensitive names, with at least two glorifying the United States’ nuclear bombing of Japan during World War II.

The official U.S. Navy Twitch account went live for a game of the space-themed, social deduction game Among Us. Players can create their character names and customize their outfits. The tags are used to identify, clear, and accuse each other whenever a murder occurs within the game.

However, the first session features players using racist names: “Japan 1945,” “Nagasaki,” and “gamer word,” which is gamer-speak often inferring a cleaner version of the N-word.

“I like how you all changed your name to Brandon,” the Navy streamer said, noting players trolling the streamer. “We had some more colorful ideas, but we wanted to keep it a little tame,” one friend answered, three of the problematic usernames notwithstanding. The crewmember using “gamer word” also chose the black outfit for his character.

The servicemen played on for an hour, never denouncing or even addressing the atrocious names. Jokes were made about the terms, but they were warned by the streamer that they would be banned if they kept “saying the same thing.”

The idea that the naming alone could be so problematic is a signal and sign of the ongoing racism that intersects military and online gaming life. That the names could be called “tame” informs of the depth of the issue.

On top of the criticism, esports insider Rod Breslau tweeted that the Navy was in partnership with Twitch and that this is a recruitment tool.

“[As] of earlier this year the US Navy are a new official partner with Twitch, including making a whole miniseries showing ‘how sailors use skills similar to ones used by professional gamers,'” he wrote. “the Navy is paying Twitch for this.”

@PongerFN tweeted, “Targeting little kids that watch twitch to join the Navi, painting a picture that its like playing video games. Not cool.”