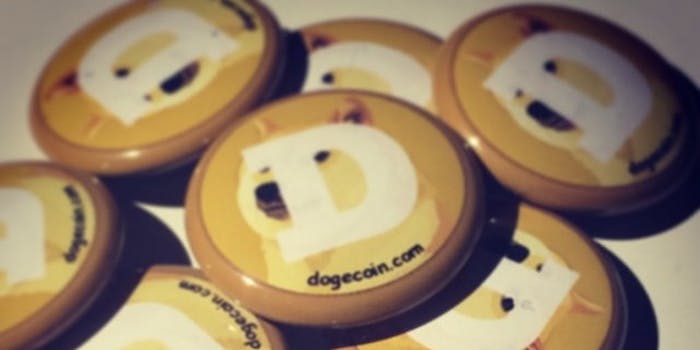 This is the first Dogecoin wallet app for iOS, and it’s a big deal

The latest boon for the burgeoning Dogecoin is a newly released wallet app for iOS—the first of its kind.

It’s been just two months since the world was introduced to Dogecoin, but already this meme-themed cryptocurrency is striding toward mainstream acceptance at a much faster rate than its predecessor Bitcoin.

The latest boon for the burgeoning Dogecoin is a newly released wallet app for iOS—the first of its kind.

The MyDoge app allows users to track their own Dogecoin at a glance while also keeping tabs on markets and news. It also lets users connect with one another and comes with limitless wallet storage.

“MyDoge is a way to view any wallet and its balance,” reads the App Store description. “You can also watch the ‘Doge Market’ where millions of Doges are traded every day, find out how much your Dogecoin is worth and more!”

The handful of reviews the app has garnered so far are positive, praising the user interface while noting that this is “obviously version 1.0.” Some reviewers suggest that the app’s designer, Robert Mooney, update the free app to include more graphical information about the Dogecoing markets.

But the particulars are less important than the app’s existence itself. Like all cryptocurrencies, Dogecoin has to establish legitimacy and become ingrained in users daily lives. An app approved for used on iOS is a firm step in the direction of providing mainstream accessibility.

And accessibility seems to be the primary characteristic with which Dogecoin hopes to distinguish itself from Bitcoin, Litecoin and others.

One way Dogecoin creator Billy Markus has tried to keep his digital currency accessible is by making it an inflationary currency rather than deflationary. As where Bitcoin mining will only ever yield a finite amount of currency, Dogecoin is designed to operate more like a central bank issuing new units of the currency in perpetuity.

Economists and researchers have argued that Bitcoin’s Achilles heel is that it’s limited supply lends itself to hoarding and saving, reducing liquidity in the market itself.

“As hoarded bitcoins vanish from circulation, transaction volume will dwindle and block creation will become less proﬁtable (fewer fees to collect),” wrote a research team from U.C. Berkley recently. “If circulation drops too much, it can precipitate a loss of interest in the system, resulting in ‘bit rot’ and veriﬁer dearth, until such point that the system has become too weak to heal and defend itself.”

Conversely, the limitlessness of Dogecoin mining removes the incentive for hoarding. Perhaps that’s why Dogecoin is already seeing more trade activity than Bitcoin, even as Bitcoin’s overall value is still much greater. As of mid-January, all the Bitcoins in the world were worth a combined $10.1 billion, in comparison to Dogecoin’s total value of $9.2 million.

But you cannot discount the role Bitcoin has likely played in Dogecoin’s success. Though it took four years from the time of its creation for Bitcoin to seize the public’s imagination, there’s no denying that Bitcoin opened up a lot of doors for cryptocurrency enthusiasts last year. Bitcoin’s rapid growth in 2013 primed the online world for other alternative currencies.