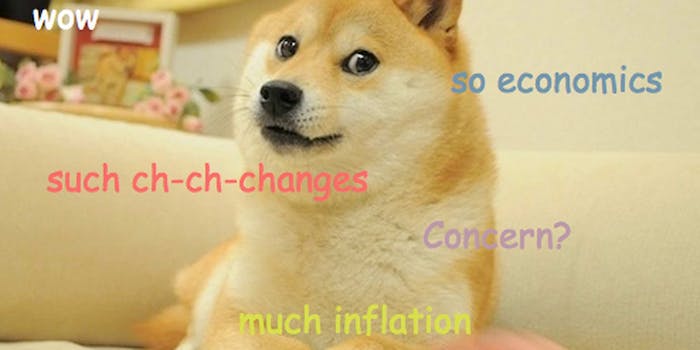 Dogecoins are limitless, and that’s a good thing

Unlike Bitcoin, Dogecoin doesn't have a limit to the amount of currency in the system at one time.

From the beginning, boosters of Dogecoin have said the meme-themed cryptocurrency was different from all the others. Many of the other major currencies, like Bitcoin and Litecoin, have a hard cap on the number of coins that can be created; when Bitcoin hits 21 million coins in 2140, no more new units of the currency will even come onto the market.

Dogecoin, on the other hand, will go on creating new coins forever—making it more akin to currencies issued central banks. It’s a decision that was written into the system’s original code and, after months of intense debate, recently reaffirmed by a post on collaborate development web-hosting platform Github by Dogecoin creator Jackson Palmer.

There are a couple reasons behind the decision. The first is that Palmer was hoping to ensure the health of the Dogecoin network itself.

All cryptocurrencies use a public ledger in which all transactions as a way to ensure that someone doesn’t get away with attempting to spend a single coin multiple times. Since there’s no central financial institution through which transactions flow, that ledger is maintained by computers around the world running software that logs all new transactions.

New coins enter the market through a process called mining. Using an elaborate guessing game of solving incredibly complex mathematical equations, one group of miners somewhere on the system is rewarded with a block of freshly minted currency every so often. For cryptocurrencies with a limited supply, the rate at which new coins are generated gradually slows over time until it hits zero.

In an email to the Daily Dot, Palmer explained that placing a cap on the final number coins has the potential to make the rewards for mining Dogecoins so small (or non-existent) that there won’t be enough miners to keep the system running.

?The sad reality is that a lot of the hash rate on alt-coin networks comes from multi-poolers who are mining coins then instantly cashing out—they just go after whatever is most profitable,” Palmer wrote. ?As block rewards get lower and lower over time, these guys disappear and move on to a newer, more profitable alt-coin. This is the fate of most coins coming on the market (and why you see them popping up and dying every day). By keeping the reward there, the hope is that a number of miners will remain and keep the network running into the future.”

?If it costs more U.S. dollars to mine a Bitcoin than I’m being rewarded for solving a block, where’s the incentive for *anyone* to do so?” Palmer continued. ?I’d like to hope there are some kind hearts out there who’ll continue to point their hashing power at the network just because they believe in the currency, but I think we can all recognize that the bulk of miners are into cryptocurrency for the profit in U.S. dollars they can make.”

There’s also another benefit to reaffirming that dogecoins will be mined for perpetuity, one that’s elemental to the very nature of the culture surrounding Dogecoin. To understand that, it’s important to step back for a moment and look at what it means to have a cap.

Currencies with a hard limit on the number of coins that will enter circulation are labeled “deflationary” because they’re designed to increase in value over time as adoption picks up and new coins entering the ecosystem can’t keep pace. Over the past six months, the price of Bitcoin has quadrupled—from $200 to $800 USD—because demand for the currency far outpaced the supply of new bitcoins coming onto the market, which is currently happening at only half the rate it was when the currency was first launched in 2009. Imagine how much the price would have swung up if there were no new bitcoins coming onto the market.

Deflationary currencies are great for early adopters who want to use a cryptocurrency as an investment vehicle, because there’s a reasonable expectation that its value will increase over time. But a constant, expected increase in value also has a downside—hoarding. If someone is holding currency they know is going to increase in value, they have an incentive to hold onto it. This strategy works well for assets like stocks, but no one is trying to build a global payments network exclusively using shares of Exxon Mobil.

The deflation issue has already hampered some business attempting to deal in Bitcoin. In an interview with Wired, Michal Handerhan, the co-founder BitcoinShop.us, a Bitcoin-only online retail portal attempting to become the ?Amazon.com of Bitcoin,” explained how he saw a 20 percent dip in sales right in the heart of Bitcoin’s most dramatic price spike. “People are holding their bitcoins and won’t let go,” Handerhan complained.

While hoarding-related volatility is a minor roadblock in the way of Bitcoin’s widespread adoption, it could be disastrous for Dogecoin.

Dogecoin is known primarily for two things: One, being named after one of the few 2013 memes that wasn’t annoying, and two, having an incredibly high transaction volume. Dogecoins move from person to person at a rate far higher than any other cryptocurrency. The value of all the Dogecoins in existence is currently just under $50 million USD, but users sent each other over $300 million USD worth of the currency in just the past 24 hours. The majority of this transaction activity comes in the form of users donating Dogecoins to each other, either by giving to charity or tipping each other with the help of automated bots on social media sites like Twitter and Reddit.

Much of this free flow of Dogecoin can be attributed to a single coin only being worth a fraction of a penny, making the act of tipping someone for making a clever comment on Reddit only a tiny bit more consequential than hitting the ?upvote” button. However, a lot of it also has to do with the good-natured, communal culture that’s arisen surrounding the currency.

Adding more units to the money supply (a.k.a. monetary inflation) doesn’t necessarily mean each unit of currency will be worth less (a.k.a. price inflation). While the two don’t often go hand-in-hand, price inflation typically follows monetary inflation if money is being pumped into the system without a concurrent expansion in economic activity. Basically, the amount of money in an economy should ideally grow at at about the same rate as the economy itself.

A little bit of price inflation, however, is often seen as healthy for an economy. Since people know that the unit of currency sitting in their pocket is slowly becoming less valuable the longer they keep it there, they have an incentive to spend it—an act that makes an economy grow.

That doesn’t mean there aren’t risks to picking the inflationary model. The next logical step in Dogecoin’s evolution is turning it into a commercial platform over which products can be bought and sold. Currently, only a small handful of merchants accept Dogecoin, but there are efforts to expand that base. If the value of a dogecoin drops to a level far lower than what it is now, it’s unlikely to make that jump from a cute novelty to a currency real people actually use to do things like order pizza or buy shampoo.

The key is for the currency to hit that inflationary sweet spot.

“As long as it’s at a steady and predictable rate, you would want that inflation rate to more or less match the growth of the global economy,” James Angel, a finance professor at Georgetown University, told Ars Technica. “In order for a currency to survive, it’s got to be useful. One of the problems we learned with gold standard was that it’s too inflexible—it takes too long for gold miners to dig it up out of the ground. Having a nice, steady, predictable money supply is actually a good thing.”

One positive sign for Dogecoin to keep inflation at a healthy rate, despite a constant projected expansion of the overall number of coins, is that, while virtual currencies technically last forever, a significant number of them simply become lost. The most famous example of lost bitcoins is the sad tale of James Howells, who accidentally threw $7.5 million worth of bitcoins in the trash when he disposed of an old hard drive containing 7,500 units of the currency that purchased for a mere $6 a few months after Bitcoin first debuted.

Palmer insists that, even though there’s been some griping from Dogecoin holders about inflation, the community has been largely supportive. ?Overall, the response has been positive because we followed what the community were saying—they want Dogecoin to continue,” he noted. ?A coin that nobody mines is a dead coin, so by keeping the incentive there (be it with fairly low rewards) past the target cap, we hope that Dogecoin can continue into the future rather than just dying like the majority of other alt-coins. We’re having way too much fun as a community for this to just die off.”