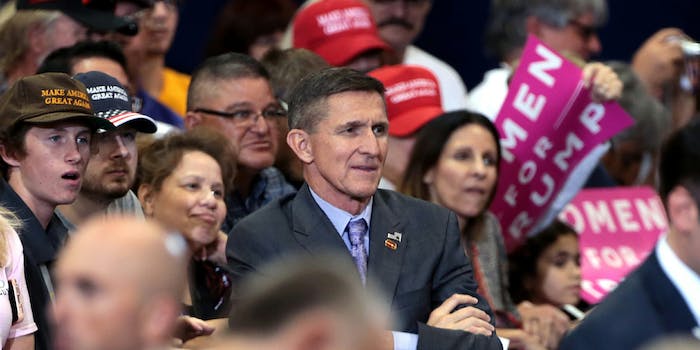 Special Counsel Robert Mueller is looking into an alleged scheme where former White House National Security Adviser Michael Flynn would have forcibly removed a Muslim cleric from the United States and delivered him to Turkey in exchange for millions of dollars, according to a new report.

Flynn, and his son Michael Flynn Jr., would have been paid as much as $15 million to bring Fethullah Gulen to Turkey, the Wall Street Journal reports. Gulen is seen as a political enemy by Turkish President Recep Tayyip Erdogan.

Earlier this week, it was reported that Mueller’s team had enough evidence to charge Flynn and his son.

The investigation is being looked into by Mueller’s sprawling probe into Russian interference in the 2016 election and other related matters. Late last month, the first charges stemming from the probe were unsealed. Paul Manafort, a former campaign chairman for Donald Trump, and his associated Rick Gates were together hit with a dozen charges, including money laundering.

George Papadopoulos, a former foreign policy adviser on the Trump campaign, was also charged with lying to the FBI about contacts he had with people with ties to the Russian government. In his guilty plea, Papadopoulos admitted he tried to arrange a meeting between the campaign and “Russian leadership.” Papadopoulos reportedly lied to the Federal Bureau of Investigation out of “loyalty” to Trump, according to ABC News.

Like Flynn, many of the charges appear to be outside the realm of Russian interference; however, some speculate that the charges could be used as a way to get information on other members of the campaign.

The investigation into Flynn centers on a meeting in December 2016 at the ‘21’ Club in New York, where Flynn and members of the Turkish government discussed taking Gulen out of the United States and transporting him to the prison-island of Imrali, the Wall Street Journal reports.

Flynn worked on lobbying on behalf of Turkey before joining the Trump campaign. He was forced out of the Trump administration in March after he mislead Vice President Mike Pence about conversations he had with Russian officials.

Former Acting Attorney General Sally Yates testified that she warned the Trump administration that Flynn could have been “blackmailed” by Russia’s government.