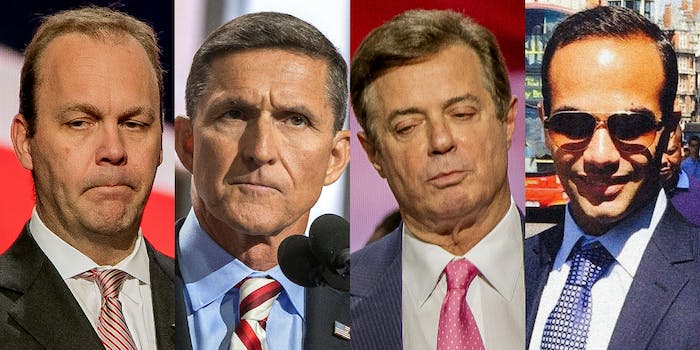 The charges are stacking up.

The federal probe into the campaign of President Donald Trump’s involvement with Russia’s interference in the U.S. presidential election broke new ground in the tail end of 2017. Thanks to the efforts of special counsel Robert Mueller, several notable Trump campaign associates have been charged or have pleaded guilty in the Russia probe. As evidence of criminal activity by the campaign mounts, here’s a look at the Trump associates who have been charged in the Russia probe thus far.

Trump campaign manager Paul Manafort was indicted on 12 criminal charges, including tax fraud, money laundering, and conspiracy against the United States by a federal grand jury in October. Manafort, a powerhouse political consultant who has advised the political campaigns of every Republican presidential nominee from Gerald Ford to Bob Dole, pleaded not guilty and was placed under house arrest.

The charges stem from the GOP consultant’s past work on behalf of former Ukraine President Viktor Yanukovych and a pro-Russia political party. The FBI has been investigating Manafort since 2014, due to suspicions of illegal activity involving his work in Ukraine. Following a five-month stint as campaign manager, Manafort exited the Trump campaign in August 2016 after reports that he may have potentially committed a felony by evading foreign lobbying disclosure requirements.

Mueller’s probe is investigating more than 11 years of Manafort’s history in an effort to charge him with a litany of tax and financial crimes. The indictment accuses Manafort of hiding $18 million dollars in payments generated from lobbying work in Ukraine in various U.S. and foreign corporations, banks, and partnerships. Manafort was also present during a Trump Tower meeting with a Russian lawyer and Donald Trump Jr. and Jared Kushner, which is now being investigated by House and Senate intelligence panels.

In December, Manafort was caught working on an op-ed with a person with ties to Russian intelligence while under house arrest, which may impact his bail deal.

A longtime associate of Paul Manafort and political consultant, Rick Gates was also charged by the FBI in October for consulting work done in Ukraine. Gates worked as Manafort’s deputy in the Trump campaign and even continued to fundraise $25 million for a pro-Trump non-profit after Manafort’s departure from the campaign in August 2016. Gates signed-off and edited Melania Trump’s infamous campaign speech for was accused of plagiarism. He went on to work for the Trump inaugural committee.

Gates is currently under house arrest with a $5 million dollar bail.

Former Trump national security advisor Michael Flynn is now actively cooperating with Special Counsel Robert Mueller after being charged with lying to the FBI about his communications with Russia. Flynn pleaded guilty, and his lawyers are currently negotiating a deal with Mueller. The expectation is that Flynn will receive a lighter sentence in exchange for providing Mueller with evidence to aid the Russia probe.

A retired three-star Army Lieutenant General, Flynn was interviewed by FBI agents over his Russian contacts less than a month after he took on the role as Trump’s national security advisor in January 2017. The FBI questioned Flynn about his communications with Sergey Kislyak, the Russian ambassador to the U.S. Flynn had discussed sanctions on Russia with the envoy in December 2016, then lied to the FBI about the conversation. Trump asked for Flynn’s resignation shortly after the news broke of the FBI’s involvement.

Flynn is also under investigation for his involvement in a plot to kidnap Turkish cleric Fethullah Gülen and deliver him to the Erdoğan government in exchange for money.

Trump foreign policy aide George Papadopoulos pleaded guilty in October to lying to the FBI about his contacts with Russian agents. The 30-year old allegedly worked with Russians to obtain opposition research on Hillary Clinton as well as to arrange a meeting between Russian government officials and the Trump campaign. Papadopoulos lied about his actions when questioned by the FBI in January.

“Through his false statements and omissions, [the] defendant … impeded the FBI’s ongoing investigation into the existence of any links or coordination between individuals associated with the Campaign and the Russian government’s efforts to interfere with the 2016 presidential election,” Mueller’s team wrote in the indictment.

Papadopoulos was arrested at the Dulles International Airport outside of Washington, D.C., in July. While the Trump White House has distanced itself from Papadopoulos and claimed he was just a “low-level volunteer,” he appears in a photo with Trump and other high-level campaign officials in March 2016 that was posted on Trump’s official Instagram feed.