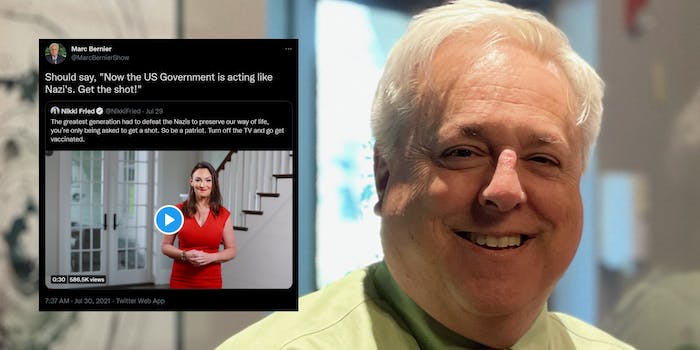 A right-wing Florida radio host who dubbed himself “Mr. Anti-Vax” and compared vaccine efforts to Nazism has died of COVID-19. He was 65.

Social media was awash with commentary about Marc Bernier’s death, much of it frustrated and unsympathetic.

Bernier repeatedly spoke out against vaccines on his program on WNDB, a radio station in Daytona Beach, Florida. Last December, his co-host Justin Gates asked if he’d get vaccinated. Bernier replied, “Are you kidding me? Mr. Anti-Vax? Jeepers.”

Bernier remained steadfastly opposed to vaccines. On July 30, in what would be his final tweet, he compared Florida Commissioner of Agriculture and Consumer Services Nikki Fried’s vaccine promotion to Nazism. (Fried is Jewish.)

WNDB confirmed Bernier’s death in a statement on Saturday. “It’s with great sadness that WNDB and Southern Stone Communications announce the passing of Marc Bernier,” it said.

While it’s unknown whether Bernier was vaccinated, after he fell ill earlier this month, WNDB operations director reiterated the longtime host’s anti-vax beliefs to the Daytona Beach News-Journal. “If you’ve listened to his show, you’ve heard him talk about how anti-vaccine he is on the air,” Mark McKinney told the News-Journal.

Bernier is the latest conservative who publicly opposed virus control measures to succumb to it. On Saturday, 30-year-old Caleb Wallace, better known as Mr. Anti-Mask, died of COVID.

A subreddit called the Herman Cain Award—for the anti-mask former Republican presidential candidate who died of COVID last summer—is dedicated to virus deniers and opponents of masks and vaccines who die of COVID. Hundreds of redditors commented on a post announcing Bernier’s death.

“How many fucking right wing radio propagandists are left?? I mean, 1 is too many, but man… It’s gotta be moving towards the [top] 10 dangerous jobs!” reads one of the top comments.

Bernier’s death comes as the highly contagious Delta variant sweeps the nation. His home state of Florida is widely considered the epicenter of the virus. While other states are seeing positive cases, hospitalizations, and deaths fall, the Sunshine State has posted its highest numbers of positive cases and deaths in recent weeks.

Bernier is reportedly the third right-wing radio host in Florida who opposed masks and vaccines to die of COVID this summer.

WNDB has asked for privacy for Bernier’s family in their time of grief.