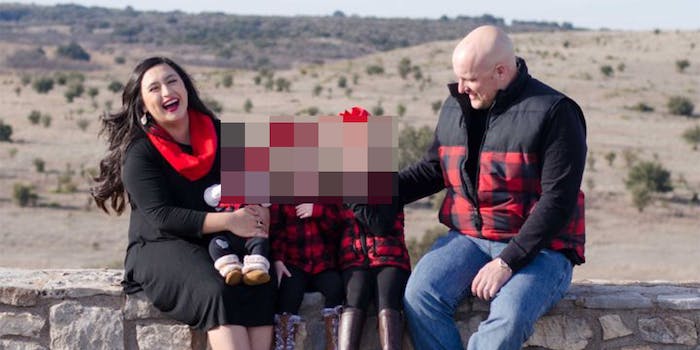 ‘It’s not looking in our favor’: Man who organized anti-mask Freedom Rally now on a ventilator after catching COVID (updated)

The Freedom Rally was for those who were 'sick of the government being in control of our lives.'

Update 11:34am CT, Aug. 30: According to a Facebook post from his wife, Caleb Wallace died Saturday, losing his battle with COVID-19.

“Caleb has peacefully passed on. He will forever live in our hearts and minds,” she said.

A Texas man who had organized a “Freedom Rally” in protest of COVID-19 restrictions is now on a ventilator after becoming infected with COVID, according to his pregnant wife.

On Wednesday, Jessica Wallace posted a “heartbreaking update” about her husband Caleb. “It’s not looking in our favor,” she wrote on Facebook. “They called and said they’ve run out of options for him, and asked if I would consent to a do not resuscitate.”

The San Angelo Standard-Times had reported that Caleb had been hospitalized with COVID for more than a month, with Wallace telling the paper that her husband initially refused to get tested for the virus and tried his own vitamin regimen to treat himself rather than seeing a doctor.

Most days his wife said that she and her three daughters FaceTime him in the hospital with the help of a nurse, though the conversation is one-sided because he can’t respond while he is intubated.

Caleb helped organize the “Freedom Rally” on July 4, 2020 for those “sick of the government being in control of our lives,” and with attendees who held signs against masking and business closures during the pandemic, the Standard-Times reported.

But by early August of the next year, he fell severely sick, unable to breathe by himself. He landed in the hospital, according to Wallace, who called it a “humbling, eye-opening experience.”

Wallace organized a GoFundMe page to help support her family, whose bills have been piling up as Caleb has been out of work and in the hospital. The couple is also expecting another child in the fall.

Wallace says that she has always worn a mask, but that her husband’s sickness has made her take the virus more seriously. “It’s made us realize that COVID-19 does not discriminate,” she said.