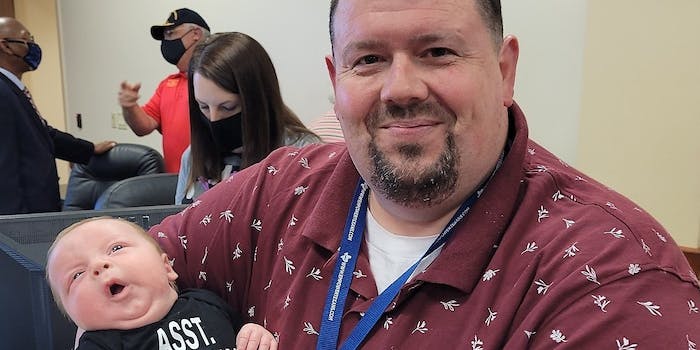 'Your foolishness has also infected your wife and may orphan your kid.'

H. Scott Apley, a GOP official from Texas who frequently advocated anti-vaccine and anti-mask views on social media, has died from COVID-19 in Galveston. His death came five days after posting a meme on Facebook mocking COVID-19 and doubting the utility of the vaccine. He was 45.

Apley’s death comes as COVID-19 cases continue to ramp up, with the onset of new variants making landfall in the U.S. Numerous COVID-19 skeptics have become seriously ill or died from the virus.

A Dickinson City council member and State Republican Executive Committee member, Apley died on Wednesday morning, according to a GoFundMe page. On Sunday, Apley was admitted to a hospital in Galveston with “pneumonia-like symptoms” and soon found himself on a ventilator. His wife, Melissa, was also infected but hasn’t required hospital admission. He also left behind an infant son.

“When I was very young, my father passed away very young, and one of the first things I thought of was that he’s got this baby and he’s going to grow up and not really know his dad,” said Dickinson City mayor Sean Skipworth. “I know what that’s like, and so I feel really awful for him and Melissa, his wife, and the baby especially.”

On July 30, the hardline conservative and devout Christian posted on Facebook to challenge the wisdom of being vaccinated.

Apley had also posted other COVID-19 memes, including one insinuating about Nazi German concentration camps.

He posted an article about COVID-19 vaccine sites incentivizing people to take the vaccine, which he called “disgusting.” Commenters have still been dumping on him for his ironic anti-vaccine rhetoric on each of his more recent Facebook posts.

The Texas GOP released a statement about his death, failing to note that Apley had died of COVID-19 complications.

Throughout the onset of COVID-19, Apley continually posted anti-vaccine and COVID conspiracy material, including a ridiculous rap video.