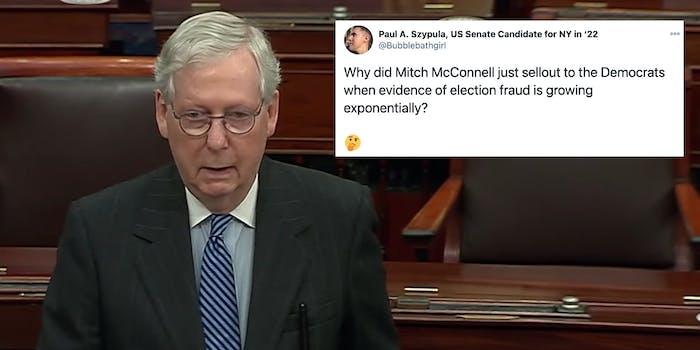 People are referring to McConnell by several popular nicknames, including 'Cocaine Mitch.'

During remarks on the Senate floor, made after the Electoral College cast its votes, McConnell congratulated both Biden and Vice President-elect Kamala Harris on their election victory.

But conspiratorial supporters of Trump, who are convinced that the election was stolen based on countless debunked claims of widespread voter fraud, are now enraged at McConnell.

Over on Parler, the social media site popular among conservatives, McConnell is being called a traitor for refusing to further the president’s baseless election fraud allegations.

Prominent far-right conspiracy theorist Laura Loomer expressed her disgust with McConnell in a post on Tuesday.

“Mitch McConnell is a traitor,” Loomer wrote. “The Republican Party leadership has failed our country and the American people.”

Reactions on Twitter were much the same, with Trump supporters lashing out at the longtime politician.

White nationalist Nicholas Fuentes called McConnell “a traitor and a RINO,” an acronym that stands for “Republican in name only.”

Conservatives weren’t the only ones taking aim at McConnell. Democrats likewise criticized the senator for his failure to support coronavirus relief legislation, along with a host of other things.

The tweets referred to McConnell by several popular nicknames, including “Cocaine Mitch” and “Moscow Mitch.”

“Now that Trump supporters believe cocaine Mitch is a traitor, maybe we can get them to support the pandemic relief bill by telling them that Mitch is the only one against it,” @Dknight10k said.

Despite Biden set to be inaugurated in January, conspiracy theorists are convinced that Trump will somehow serve a second term.