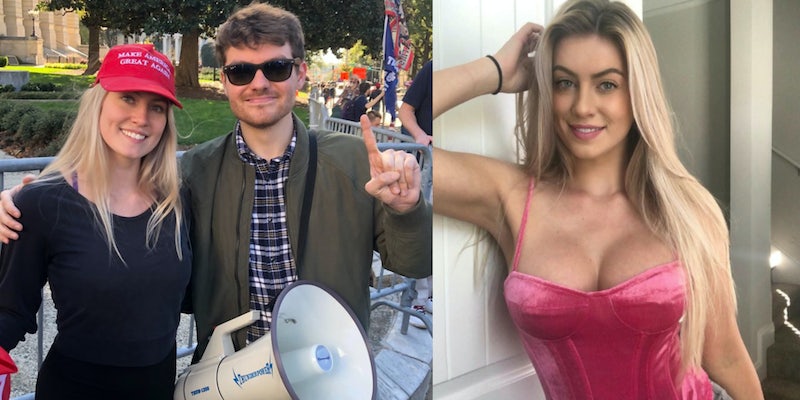 He sure seems to think she's hot.

White nationalist Nick Fuentes has more to say about the OnlyFans model he took a picture with, which resulted in frustration and backlash among his followers.

To recap, Fuentes, at the end of November, took a picture with OnlyFans model Rachel Hejduk resulting in a revolt from his “Groyper Army.”

In response to the drama, on a DLive stream, the Unite the Right attendee claimed he didn’t look at the model’s photos, to only seconds later go on and describe numerous photos Hejduk had posted to her Instagram account.

“I do not like OnlyFans girls taking pictures with me, what the hell was that,” Fuentes began.

Fuentes then said on his nightly show that he attempted to act “cool” around the girl, while saying that Hejduk taking a photo with her was “pretty good optics.”

Following the picture circulating online, Fuentes told his viewers he found out she is an OnlyFans model.

“Then I find out she’s a f*cking OnlyFans star, a quarter of a million followers on Instagram, and she’s posting these pictures where she’s you know—not that I’m looking at them, but she posted a picture on Instagram where she’s in the snow in a bikini,” he riffed.

Fuentes then talked about numerous other pictures that she had posted on her page, following him claiming to have not looked at any of them.

“Hot girls like me, and hot girls like ‘America First,'” he concluded, as the major takeaway from the incident.

The far-right leader has yet to return the Daily Dot’s request for comment on if he is a subscriber to Hejduk’s OnlyFans account.