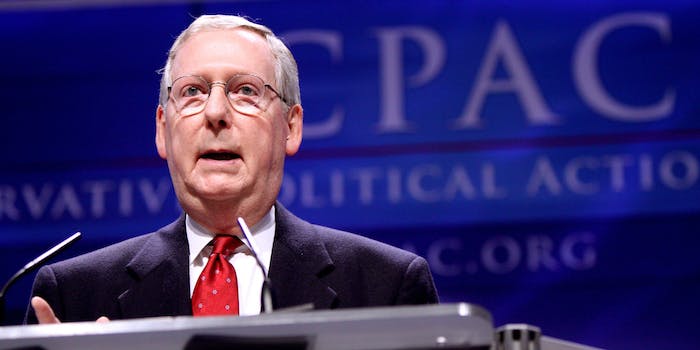 Another GOP leader bites the dust.

During a Tuesday interview with NY 1, McConnell implied that Trump is not a “credible” or “serious” enough to uphold the presidency.

“Trump clearly needs to change, in my opinion, to win the general election,” McConnell said in an interview with anchor Geoff Bennett. “What I’ve said to him both publicly and privately: ‘You’re a great entertainer. You turn on audiences. You’re good before a crowd. You have a lot of Twitter followers. That worked fine for you in the primaries. But now that you are in the general, people are looking for a level of seriousness that is typically conveyed by having a prepared text and teleprompter and staying on message.”

McConnell continued: “So my hope is that he is beginning to pivot and become what I would call a more serious and credible candidate for the highest office in the land.”

When Bennett then asked McConnell if Trump meets the threshold of credibility, the Republican leader replied: “He’s getting closer. Getting closer.”

McConnell originally endorsed Trump after the businessman won the Indiana primary on May 3, a victory that led Sen. Ted Cruz (R-Texas) and Gov. John Kasich (R-Ohio) to drop out of the race.

Since his initial endorsement, however, the relationship between Trump and McConnell seemingly went downhill. According to Hot Air, McConnell got on Trump for spending weeks talking about a “Mexican” judge in a civil suit against Trump University. (U.S. District Court Judge Gonzalo Curiel was born in Indiana.) Days later, McConnell said it was pretty obvious that “[Trump] doesn’t know a lot about the issues” and hinted that he may rescind his endorsement in an interview with Bloomberg.

McConnell’s comments to Bennett were less veiled than what he said Sunday. In an interview with George Stephanopoulos on ABC’s This Week, McConnell refused to answer whether he thought Trump was qualified to be president.

Stephanopoulos cited a poll that said 68 percent of Americans believe Trump is unqualified for the presidency. The host then asked McConnell: “Do you believe he’s qualified? And how do you convince all the voters who think he isn’t?” McConnell responded:

“Well look, I think there’s no question that he’s made a number of mistakes over the past few weeks. I think they’re beginning to right the ship, it’s a long time until November. And the burden obviously will be on him to convince people that he can handle this job. And I think a good step in the right direction was the changes he made in the campaign. He’s beginning to use a prepared script more often, which I think is absolutely appropriate for any candidate, whether you’re a longtime politician like Hillary Clinton, or whether you’re new to the game like Donald Trump.”

McConnell continued: “Look, I’ll leave that to the American people to decide. You know, he won the Republican [nomination] fair and square. He got more votes than anybody else against a whole lot of well-qualified candidates. And so our primary voters have made their decision as to who they want to be the nominee.”

Following his dismissive remarks about the presumptive GOP nominee, many are starting to question whether McConnell wants Trump to win the presidency. When asked about Hillary Clinton—who will most likely face Trump in November—in the same interview with Bennett, McConnell said that Clinton was “intelligent and capable.”

Bennett then asked, if Clinton wins in November and Republicans keep control of the Senate, would Clinton be someone McConnell could work with.

As CNN reports, McConnell isn’t the only GOP whose critical of Trump’s actions.

When asked if Trump is moving in the right direction in terms of his overall tone, Sen. Jeff Flake (R-Ariz.), who has not endorsed Trump, said, “Yeah, but it’s only been a couple of days. … He’s shown these signs before and snapped right back to the old Donald. So it’s too early to tell.”

The Trump campaign has not yet responded to our request for comment.