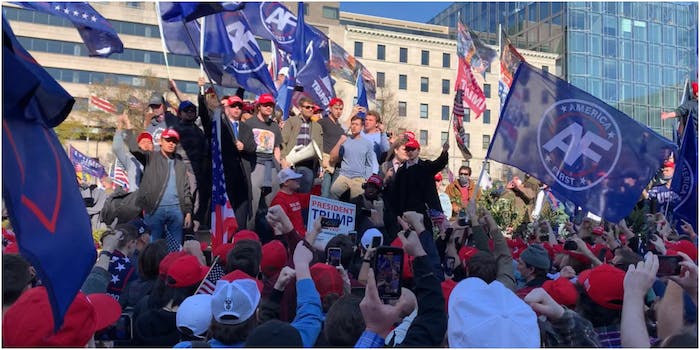 Far-right groups descended upon the Freedom Plaza in Washington D.C. Saturday for the “Million MAGA March,” where they protested the results of the 2020 presidential election and made baseless claims of voter fraud.

Much to attendees’ delight, President Donald Trump made a brief appearance before the marches got underway.

Notably, some of the loudest attendees at the march, which originally had three different names but fused into one march, were the white nationalist “groypers,” led by Unite the Right attendee Nick Fuentes.

The boisterous group of bible-carrying, white college-aged men became so loud that, at one point, their chants drowned out the main event’s speaker.

“Fuck Charlie Kirk,” they chanted. They also railed against Fox News and Republican legislators during their mini-rally, which occurred simultaneously to the larger rally.

Their leader, Fuentes, eventually appeared, and there was nothing he said that they disagreed with. At every opportunity, the groypers gleefully applauded Fuentes’ remarks.

Many, while marching to the Supreme Court from Freedom Plaza, asked to take photos with Fuentes. When he accepted, the young “groypers” would shower their leader in praise, commenting on how they watch his DLive show each night or how much idolize him.

Alt-right figure and groyper Tim Gionet, aka “Baked Alaska,” and far-right YouTuber Vincent James were also present at the march.

When asked why he decided to come out to the march, one groyper told the Daily Dot, “journalists suck” before walking away. Attendees exhibited similar disdain for the media, including Fox News.

Also in attendance at the pro-Trump march was the far-right hate group the Proud Boys, which presented themselves as “security” for the event.

Overall, the march wasn’t too eventful, as it mainly drew in many low-level MAGA characters and far-right groups. Later into the evening on Saturday, anti-fascist demonstrators and far-right instigators clashed.