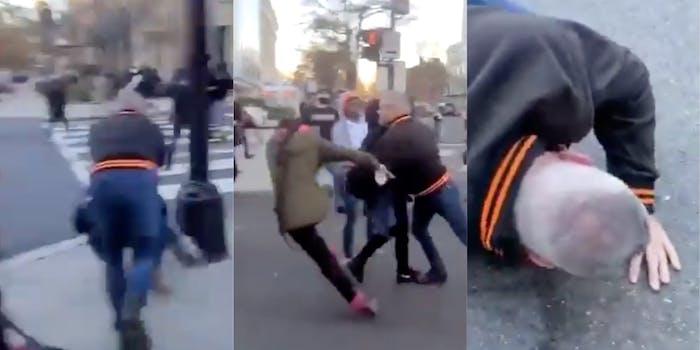 The right-wing activist has a history of manipulating media.

Right-wing writer Andy Ngo was caught mischaracterizing a supporter of President Donald Trump as a victim of an attack.

Ngo tweeted a video from the Million MAGA March on Saturday. It shows a Trump supporter walking away from a group of counter-protesters before getting knocked out by a man with a sign. The man then gets kicked while on the ground. The bloodied man is then picked up off the ground by other apparent Trump supporters. “A close-up angle of BLM rioters knocking a man unconscious who was leaving the #MillionMAGAMarch in DC earlier today. They also steal his phone when he’s on the ground,” Ngo wrote.

However, many noted that Ngo seemingly purposely left out a portion of the video that shows what led up to those events. In the extended video, the man pushes a counter-protester who is talking on a bullhorn to the ground.

The right-wing activist has a history of gaslighting and manipulating media. He’s also been seen as something of a martyr among conservatives after an alleged attack by antifa members in Portland. “Whenever Andy Ngo posts a video of an anti fascist beating someone’s ass and you think ‘how horrible!’ please just wait a day for the follow up videos to shine clarity because this dude has a fantastic skill when it comes to editing out the context or inciting incident,” one user tweeted.

It wasn’t long before Ngo began to trend on Twitter, with many noting how this is all part of his usual antics.

“Nazis do this weird thing where they go up to people, try to attack them, get the shit kicked out of them, and then upload video of themselves crying so Andy Ngo can post it with the caption ‘innocent man attacked by violent BLM,'” one user wrote.

Nick Martin suggested the public start treating Ngo’s Twitter followers “like victims instead of supporters.” “He actively gaslights them at every opportunity, teaching them to see things that don’t exist and to reject sources of information that are not approved by him. It’s troubling,” Martin wrote.

NBC News pundit and educator Brandy Zadrozny sees Ngo’s “work” as a learning opportunity, however. “I used to teach a media literacy course and I kinda wish I still did so Andy Ngo’s videos could be put to good use. Selective edits, stripping context, text that doesn’t match visuals, emotional manipulation, obvious bias, historical untrustworthiness, the man does it all!” Zadrozny wrote.