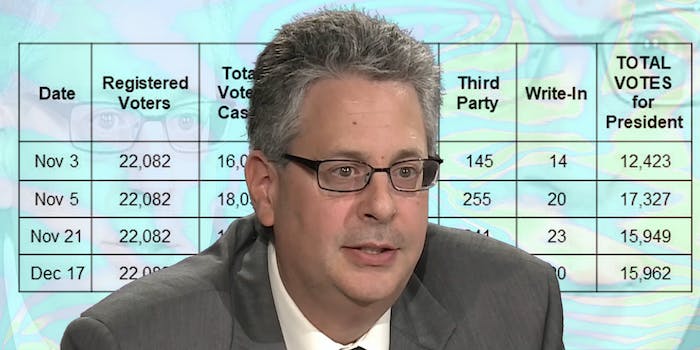 Matthew DePerno keeps losing in court, but that hasn't stopped him from raising $400,000 for an 'election fraud defense fund.'

Until late last fall, few people outside Michigan had heard of Matthew DePerno. The Michigan attorney remains a lesser character in the national conversation, but in the delusional fever swamp inhabited by people who believe thoroughly debunked lies about widespread election fraud and clamor for former President Donald Trump to be reinstated, the name DePerno is spoken with reverence.

DePerno is the lawyer behind one of the first, and longest surviving, lawsuits to overturn the 2020 presidential election results. In May, a court ruled against his request for a “forensic audit.” On June 25, the court denied his motion to reconsider the case.

Although he’s challenging the outcome in just one rural Michigan county—a county in which Trump won handily—and he keeps losing in court, in certain circles, DePerno is held in high esteem. His status as election crusader is equal to that of similarly quixotic lawyers Sidney Powell, L. Lin Wood, Jenna Ellis, and Rudy Giuliani. Like the others, he’s proven willing to continue repeating unfounded allegations of widespread fraud, delighting election conspiracy theorists. And he’s capitalizing on it.

DePerno refused to tell the Daily Dot whether he intends to appeal the loss in court he was recently served. But his money-making machine is still alive and well.

A fundraiser linked to DePerno’s website says he hopes to raise a million dollars for his “election fraud defense fund.” People have proven more than happy to give to the cause. As of early July, he’s closing in on $400,000 on this fundraiser alone. He’s raising money through other means as well, such as events. The fundraiser notes that he’s also happy to take a check.

The Daily Dot sent DePerno a detailed list of questions about the funds he’s raising, how he plans to use them, and if he’ll share them with his client. We also asked whether he’s getting money from interest groups, as some believe; if he intends to appeal the Antrim County case; who he believes is behind the conspiracy he touts and why they would throw the election in Biden’s favor; why he refuses to accept the findings and statements, including from Republicans, that contradict his assertions of election fraud; and whether Dominion Voting Systems has threatened to sue him for defamation. DePerno refused to answer.

“Your email is wildly biased and filled with inaccurate information,” he wrote. “I do not believe you are serious about writing an article when the majority of your premises are so clearly wrong that it is obvious you have done little to [no] research.”

Offered sources for the assertions of fact in the questions—from Detroit News, Business Insider, the Detroit Free Press, a Michigan Department of State report, and an election affidavit he reportedly drafted—DePerno insisted that these were all “left-leaning.” He declined to provide links to sources that confirm his assertions.

Until the election made him famous (or infamous, depending on one’s view), DePerno was best known for representing a Michigan lawmaker involved in one of the biggest sex scandals in state history in both a perjury case and an unsuccessful defamation suit against the Detroit News, which broke the story. The defamation case ended with an $80,000 judgment for sanctions against DePerno and his client. In May, the paper agreed to settle for $20,000.

Last November, DePerno was thrust into the national limelight when he filed suit against Antrim County on behalf of William Bailey.

The case became the launchpad for claims of widespread election fraud that persist to the present day, in spite of multiple audits, reports, and expert analyses debunking them.

The cause of action began with a human error that caused the preliminary results to show President Joe Biden had inexplicably won the heavily Republican county. The results were flagged, and the problem was identified and quickly corrected. Traverse City Record-Eagle reported that, when adding a late-filing candidate in one precinct to the ballot in October, Antrim County Clerk Sheryl Guy didn’t realize she needed to update the software for all 16 precincts, which caused votes to tabulate incorrectly for Biden. The mistake was fixed within hours of polls closing; updated results showed that Trump had handily won the county, as expected.

That could’ve been the end of the story. But DePerno filed suit on behalf of Bailey; meanwhile, Trump and his cohorts were scouring the country for evidence of voter fraud. Within days, they’d set their sights on Michigan. Much to the surprise of Guy, the Republican clerk in Antrim County, they vowed to prove that the Dominion Voting Systems machines in the county had been programmed to flip votes in Biden’s favor.

This confluence of events landed DePerno in the middle of the effort to overturn the election in Trump’s favor.

It’s made him a right-wing star.

The Gateway Pundit breathlessly repeats DePerno’s allegations. His claims make the rounds on Telegram, which has become a haven for the far-right. QAnon conspiracy theorists have circulated an affidavit he reportedly drafted that seeks yet another election audit. His firm’s website shows him by Mike Lindell’s side, being featured on early QAnon proponent Tracy “Beanz” Diaz’s podcast, and as a guest on Hannity Radio. Even his tweets can cause a fervor.

It doesn’t seem to matter that his lawsuit keeps getting spiked in court, a subsequent hand recount confirmed the Antrim County results, and that he hasn’t produced credible evidence of voter fraud. Nor does it matter that the report he touts, which showed an unbelievable 68% error rate in the county’s Dominion machines, was exhaustively disproven in a 54-page analysis released by the Michigan Department of State. The analysis said DePerno’s report “contains an extraordinary number of false, inaccurate or unsubstantiated statements.”

Nor does it put a hitch in his step that his allegations keep getting disproven. (He insists he’s right.) On June 23, the Republican-led Michigan Senate Oversight Committee released a report in which it spent the better part of three pages meticulously addressing, and eviscerating, his claims.

“The Committee closely followed Mr. DePerno’s efforts and can confidently conclude they are demonstrably false and based on misleading information and illogical conclusions,” the report states.

At the conclusion of this section, the committee suggests repercussions may be warranted.

“The Committee recommends the Attorney General consider investigating those who have been utilizing misleading and false information about Antrim County to raise money or publicity for their own ends. The Committee finds those promoting Antrim County as the prime evidence of a nationwide conspiracy to steal the election place all other statements and actions they make in a position of zero credibility.”

Unlike other attorneys involved in election suits, the Michigan Attorney General’s Office has not filed a grievance against DePerno. A spokesperson implied that it is considering it, however.

“At this time, we are reviewing the Michigan Senate Oversight Committee’s report and its recommendation that we get involved. It would be inappropriate to comment until that review process is complete,” the office told the Daily Dot via email.

DePerno remains defiant. “With this report, the Michigan Senate is attempting to cover up evidence of election fraud in the November 2020 general election,” he said in a press release the day after the committee released its report lambasting him. He went on to accuse the state Senate of attempting to criminalize political speech. He has not been accused of a crime, nor does the report recommend it.

Election attorney Mark Brewer, former chair of the Michigan Democratic Party, told the Daily Dot that the court shouldn’t have allowed DePerno’s suit to drag on so long, and that doing so fueled election conspiracies and lies. “It should have been dismissed early on like all the other frivolous lawsuits in Michigan,” Brewer said.

Brewer believes that the case is among the factors that led to the Capitol riot. “It contributed to the atmosphere that made that possible. There is no question about it,” Brewer said.

It doesn’t matter who says DePerno’s wrong, be it experts, journalists, other Republicans, or even former Trump election officials. To those with an unshakeable belief that the 2020 election was rigged, DePerno’s word is as good as gold. From June 28-30, his online fundraiser collected an additional $5,000.

Neither DePerno nor his supporters are giving up. Last Wednesday, DePerno tweeted about the error tabulating the New York City municipal election results. “Is this the first time in history that Democrats left ‘test ballots’ in the count?” he asked.

His detractors piled on in the comments. But his fans ate it up. “Why does any election require 135,000 test ballots. Wreaks [sic] of fraud,” commented one.