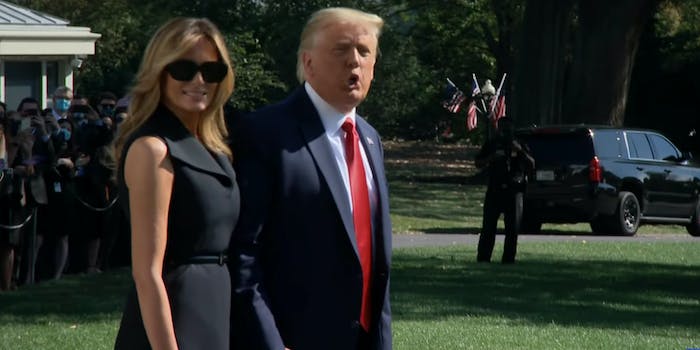 The Melania body double conspiracy has returned—for like the fourth time.

The Melania Trump body double conspiracy has returned after a photo made the rounds on Saturday featuring President Donald Trump and the first lady boarding Marine One.

Melania was sporting oversized dark glasses in the photo, which was reportedly taken on Oct. 22 as the Trumps headed to the second and final presidential debate. Oct. 22 marked Melania’s first time back on the president’s campaign trail since 2019, according to Inside Edition. The photo has since gone viral, prompting “Fake Melania” to trend on Twitter.

“The only thing I’ll miss from this administration is them swapping in new Melanias and just pretending we won’t notice like a 4-year-old with a guppy,” Zack Bornstein tweeted.

Many are posting side-by-side images of Melania and the photo in question, claiming her “teeth” are a dead giveaway that the Trumps are using a body double.

The photo is apparently even turning some previous skeptics into Melania body double truthers. “I’ve been skeptical about the fake Melania stories … Until today,” one user wrote.

Many are convinced Hope Hicks, senior White House adviser, is filling in for the first lady, prompting her to also becoming a trending topic.

Others, however, have always believed the purported “fake Melania” is one of her Secret Service agents, who bears a resemblance to her.

Some began pointing out all the other times the Trumps have been accused of using a Melania body double.

The conspiracy first surfaced in 2017 after a CNN video went viral featuring President Trump standing on the White House lawn with Melania, who was wearing oversized dark glasses. She didn’t quite look like herself, according to skeptics online at the time. The president only fueled the body double speculation by sketchily saying, “My wife Melina, who happens to be right here.”

The conspiracy returned in 2018 after pictures surfaced of the president and first lady in Brussels for the NATO Summit. And it returned once again in 2019 after the couple was photographed in Alabama surveying tornado damage.

At the final presidential debate, Melania was seen “ripping” her hand away from Trump. And recently, she has been reportedly increasingly absent on the campaign trail due to lingering post-coronavirus symptoms. Melania’s absence in President Trump’s campaigning efforts is being compared to Jill Biden’s presence in former Vice President Joe Biden’s campaigning efforts.

And now the Melania body double conspiracy is back in the limelight in 2020. This surely won’t be the last time it takes the internet by storm.