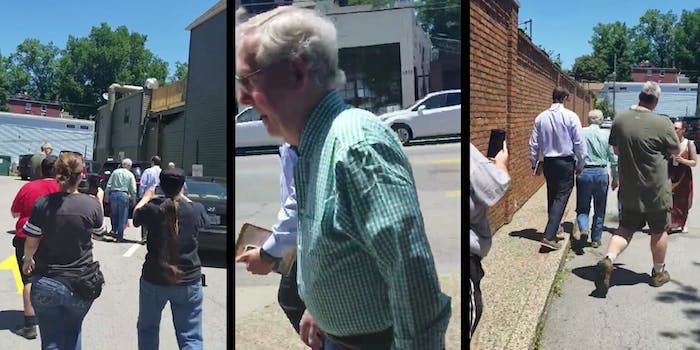 The group that organized the small protest said the comment came from someone who is a not a member of their group.

Protesters on Sunday followed Senate Majority Leader Mitch McConnell (R-Ky.) to his car shouting at him after he left a restaurant in Kentucky.

The confrontation is another in a growing number of high-profile Republicans who have been met by protesters in public in recent weeks, including several members of President Donald Trump‘s administration.

A video of the protesters shouting at McConnell shows people chanting “vote you out” at the Senate Majority Leader as he walks to his car in a parking lot.

The protesters also asked him “where are the babies, Mitch?” and shouted “Abolish ICE,” referencing the separation of undocumented children and their families at detention centers along the country’s southern border. One person also referred to McConnell as “Turtle Head.”

The Washington Post was the first news outlet to report on the video.

One moment of the video, where one of the protesters appears to threaten the senator by telling him “we know where you live” ignited conservatives online, who have already expressed displeasure over the confrontations of White House Press Secretary Sarah Huckabee Sanders and Homeland Security Secretary Kirstjen Nielsen.

Some right-wing Twitter users accused the group of following “orders” from Rep. Maxine Waters (D-Calif.) who encouraged her supporters to confront members of Trump’s administration in public—which ultimately resulted in her receiving death threats.

“We know where you live, b*tch”

Protesters harass Mitch McConnell at a restaurant yelling threats: "We know where you live!". This is Maxine Water's America. https://t.co/fWfE9XcsvI pic.twitter.com/RW4EtNWkKU

Left-wing activists harassed Mitch McConnell as he was leaving lunch on Saturday and threatened him: "We know where you live, b*tch!"pic.twitter.com/Y7bmjbamHo

@RepMaxineWaters Time to quit Maxine, we know where you live , Mitch McConnell was verbally Attacked at a restaurant thanks to you and your kind what goes around comes around

Right-leaning websites like the Blaze and Gateway Pundit also condemned the protest, calling the group “angry socialist protesters” and “part of a mob.”

In a statement, the Louisville Democratic Socialists of America, which organized the small protest, said the person who shouted “we know where you live” was not part of their group.

“We believe it is a reference to peacefully protesting in front of McConnell’s house, which is a regular occurrence in Louisville,” the group wrote on Facebook. “However, we cannot speak more to the comment because it did not come from our organization or our members.”