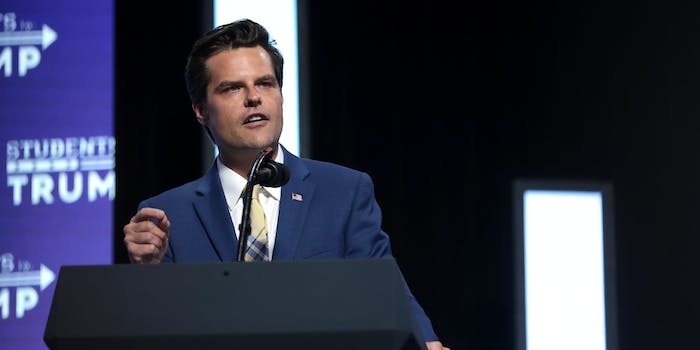 Gaetz has long asserted social media has an anti-conservative bias.

Rep. Matt Gaetz (R-Fla.) called for an investigation into whether Facebook CEO Mark Zuckerberg lied to Congress in 2018 about a perceived bias against conservatives on social media.

The congressman, a frequent ally of President Donald Trump, announced that he had filed a criminal referral against Facebook for making false statements to Congress in April 2018.

During the 2018 hearings, Zuckerberg denied that the company had any bias when asked about it by Sen. Ted Cruz (R-Texas).

“First, I understand where that concern is coming from because Facebook and the tech industry are located in Silicon Valley, which is an extremely left-leaning place,” Zuckerberg responded. “And this is actually a concern that I have and that I try to root out in the company; is making sure that we don’t have any bias in the work that we do, and I think it is a fair concern that people would at least wonder about.”

To back up his claim, Gaetz shared a video from Project Veritas, a far-right organization that uses undercover videos that have been found to have inaccuracies, where Facebook content moderators say the social media giant’s algorithms filter conservative content.

“As a member of this body, I question Mr. Zuckerberg’s veracity, and challenge his willingness to cooperate with our oversight authority, diverting congressional resources during time-sensitive investigations, and materially impeding our work. Such misrepresentations are not only unfair, they are potentially illegal and fraudulent,” Gaetz said in a statement.

While Zuckerberg is facing criticism from the right, he has also drawn ire from left-leaning groups.

Last week, Zuckerberg tamped down speculation that he had a secret deal with Trump allowing the president to post incendiary content in exchange for more lax regulation.

Facebook has faced fierce criticism, even from within the company, for its moderation policies surrounding Trump’s posts, especially when compared to other social media platforms.