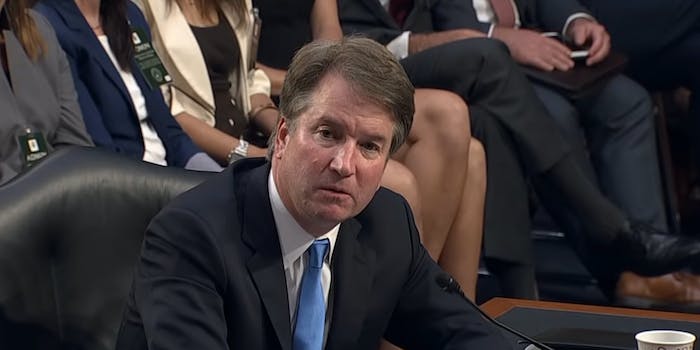 Should Brett Kavanaugh recuse himself from the Supreme Court’s Facebook case?

Supreme Court Justice Brett Kavanaugh is being called on to recuse himself from a case regarding Facebook because of his friendship with one of the social media giant’s executives.

A coalition of nine groups including Demand Progress, the American Economic Liberties Project, Accountable Tech, and others called for Kavanaugh’s refusal on Friday.

The groups pointed to Kavanaugh’s ties to Facebook’s Vice President of Global Public Policy Joel Kaplan as a reason for the justice to recuse himself.

Kaplan was spotted at Kavanaugh’s contentious confirmation hearings last year when he was accused of sexual misconduct by Dr. Christine Blasey-Ford. A book about Kavanaugh said Kaplan “helped quarterback” Kavanaugh into the Supreme Court vacancy.

“The top lobbyist at Facebook called Kavanaugh his ‘closest friend in Washington’ and even hosted a private celebration for Kavanaugh at his home after he was confirmed despite multiple, credible allegations of sexual assault. Brett Kavanaugh cannot possibly claim to be neutral in this case,” the groups said in a statement.

The case in question is in regards to automatic texts sent by Facebook, which the Supreme Court agreed to hear earlier this month.

Noah Duguid sued Facebook in 2015, saying that he did not have an account on the site and was receiving unwanted text messages from it. Duguid alleged the social media giant was violating the Telephone Consumer Protection Act by using an autodialer.

The Supreme Court will consider the definition of an “automatic telephone dialing system,” according to SCOTUSBlog, and whether automatic texts, like the ones sent to Duguid, are in violation of the Telephone Consumer Protection Act.