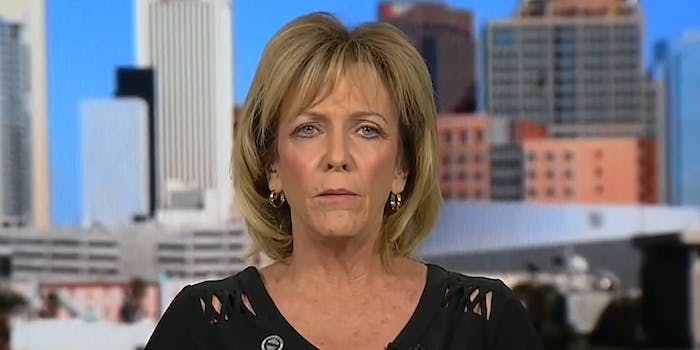 Mary Ann Mendoza was slated to speak during the RNC.

Usually, when people are canceled for tweets, it’s because of an old bad take unearthed from years ago. It’s typically not for broadly endorsing anti-Semitism almost immediately before the biggest moment of your life.

Mendoza is an “angel mom”—the mother of someone killed by an illegal immigrant—and was slated to speak at the Republican National Convention last night.

“Do yourself a favor and read this thread,” Mendoza posted, according to the Daily Beast, linking to a thread titled: “‘A Gray Marble And A Den Of Vipers.”

The thread went on to discuss the Rothschild family, a popular anti-Semitic trope about how the Jewish family secretly controls all the banks of the world. It is also a big tenet of the QAnon conspiracy theory, which has a huge undercurrent of anti-Semitism running through it. It posits that President Donald Trump is out to save America from a cabal of pedophiles.

The thread made references to numerous conspiracies, including the sinking of the Titanic.

After the Daily Beast published a report on Mendoza’s tweet, the RNC pulled her from her speaking slot, which had been previously recorded due to the virtual nature of the convention this year.

“We have removed the scheduled video from the convention lineup and it will no longer run this week,” the Trump campaign told CNBC in a statement, declining to elaborate.

Mendoza’s tweets are now protected, but according to CNBC, she posted a statement after her slot had been pulled.

“I retweeted a very long thread earlier without reading every post within the thread. My apologies for not paying attention to the intent of the whole message. That does not reflect my feelings or personal thoughts whatsoever,” Mendoza wrote.