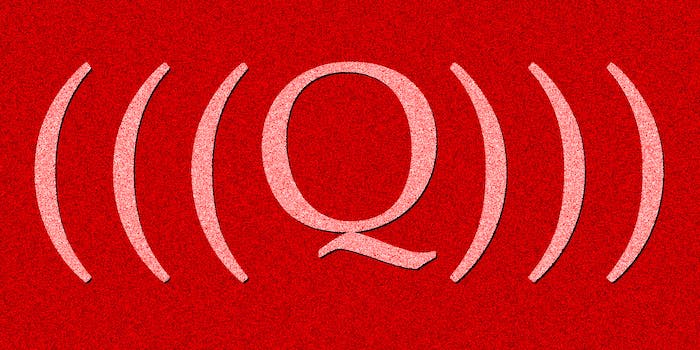 It's been there since the beginning.

Like many popular right-wing news and commentary websites, the Gateway Pundit is fairly agnostic about the QAnon phenomenon. Despite Q’s increasing influence in conservative politics, Jim Hoft’s hyperbolic far-right site had, until recently, only published one story on Q: an anonymous piece that takes Q’s claim to be a military intelligence insider leaking classified information at face value. This isn’t unusual in the “mainstream” far-right media sphere, which tends to keep Q followers at arms’ length, neither giving their beliefs’ credence nor making any attempt to deflate them.

So it was all the more surprising when Gateway Pundit, under the byline of Jim Hoft’s brother Joe, recently published a piece making an explosive allegation: that Russian intelligence was using anti-Semitic memes and message board posts to discredit QAnon as a hateful movement, as a way of hurting President Donald Trump and conservatives in general.

“Russians and Other Nefarious Operators Are Inserting Anti-Semitic Conspiracies Into the Q Movement,” the post’s title blares. It goes on to use the content of a blog post by data scientist Yaacov Aplebaum to claim that Russian operatives based in both Europe and San Diego are “evildoers” who are “reportedly inserting anti-Semitic messages into the Q movement, including claims that Jews are killing babies and more.”

What’s more, these Russians intend to “use the Q network and branding to distribute anti-Semitic materials in order to link President Trump and his team with white supremacy.”

The materials Hoft claims are being pushed by Russian influence networks to hurt Q include graphic memes about “Zionist rituals” involving killing babies, accusations that Adolf Hitler was fighting a righteous war against the Jewish-controlled New World Order, and outlandish claims that both Michael Jackson and John F. Kennedy Jr. are alive and working for “the Q team.”

The original post that Gateway Pundit uses is not about Q so much as it is about a phenomenon that Aplebaum refers to as “information discreditation,” the creation of false material that will discredit the people who share it—and how Russian networks use it to discredit Americans. Aplebaum told the Daily Dot that while he believes Gateway Pundit accurately represented his original intent in exposing Russian influence networks, “I don’t know what percentage of the overall Q activity this represents,” and that much of this material was made by Russian propaganda cells that have been active longer than Q has been posting.

But two things are clear from over two years of QAnon. The first is that while there might be some Russian activity related to Q (Aplebaum believes it’s exclusively done by human trolls rather than bots), the movement’s core believers and prominent promoters are organic and very real. The second is that the anti-Semitism that Hoft claims is being “inserted” into QAnon as disinformation to make Trump look like a white supremacist has always been a feature of the movement as a whole. And it’s something that shouldn’t be ignored as the QAnon community attempts to gain a hold in mainstream politics and culture.

Anti-Semitism has been part of the fabric of QAnon since the conspiracy theory first launched in Octpober 2017. The conspiracy theory revolves around the busting of heavily-funded trafficking rings engaged in the Satanic sacrifice of children to drink their blood—a tweaked version of the classic Jewish “blood libel” conspiracy about Jews sacrificing Christian children. In particular, Q is seemingly obsessed with the Rothschild banking family and George Soros, two figures that have driven conspiracy theories and anti-Semitic tropes for decades.

The Rothschild banking family (no relation to the author of this story) has its roots in the financial success of patriarch Mayer Amschel Rothschild, who achieved incredible wealth in the late 1700s and sent his five sons to five different European financial centers to establish careers in investment. With that success came anti-Semitic conspiracy theories, starting with the family’s supposed investment in “both sides” of the Battle of Waterloo in 1815, continuing with rumors that the family controls the Bank of England, and going all the way to today.

Just a few weeks after Q’s first posts, the conspiracy theory avatar spent four drops listing all of the “ROTHSCHILD OWNED & CONTROLLED BANKS” in the world, which essentially is a list of almost every central bank in the world. That list, which appears to have been taken from a 2013 blog post on the conspiracy site “Humans Are Free,” operates on the incorrect assumption that the wealthy banking family has its “tentacles” in the financial operations of every nation on the planet, conquering them at will and installing a family-owned “central bank” to more efficiently pillage their people.

It should also be noted that there is no such thing as a “Rothschild central bank,” as central banks are government organs responsible for printing money and setting monetary policy. No central bank has any significant private ownership and the wealth and importance of the Rothschild banking family in general in the 21st century tends to be overstated.

Q’s obsession with the Rothschilds doesn’t stop there, as the poster used one of their first drops to declare that the family (along with Soros, Barack Obama, and Hillary Clinton) are part of an “evil corrupt network of players;” insinuated the family had a hand in creating AIDS; hinted they sold a Black Forest lodge where they hunted humans; and linking them to the NXVIM sex cult.

As for Soros, he plays the same role in Q’s conspiracy theory mythology that the Hungarian financier plays in many others—an unimaginably wealthy string-puller who hid his supposed Nazi past to leverage the nations of the world into wars and strife to profit him. Like the Rothschilds, Soros is a lightning rod for anti-Jewish sentiment and distrust of wealthy “European bankers.” But unlike the Rothschilds, most of the anti-Semitism directed toward Soros is recent, originating in the early 2000s as a right-wing reaction to Soros’ funding of liberal activist groups and progressive causes.

Q’s second-ever post bizarrely claims Soros donated “all his money” to a mysterious entity, claims he funds domestic terrorism, says he owns voting machines used to try to rig the 2016 election, takes orders from a “sick and evil” master known only as “P,” colludes with the Democratic National Committee and Hunter Biden, and funds the “LOSER BOTS” that push back against Q on social media.

But by far the most anti-Semitic post Q ever made was his repost of a cartoon on 8chan, which is generally known as “Why Do They Persecute Me So,” and pictures a stereotype of a Jewish man holding a knife, knee-deep in Eastern European blood. Q’s reply to the cartoon is an incomprehensible riddle, “The “Chair” serves the Master. Who is the Master? P = C.”

Q gurus and believers are also no strangers to anti-Jewish sentiment. It’s all over the social media posts of its proponents, with Q promoter and right-wing conspiracy theorist Dylan “Educating Liberals” Wheeler bringing up “The Jewish Question” in a 2019 interview; and popular Q figure Jordan Sather telling his 188,000 followers that “the real virus plaguing our world” is “(((them))),” using the three parentheses designation many far-right sites use to note Jews. And a search of website qresear.ch, which compiles all of the posts on 8chan and 8kun related the conspiracy theory, found over 89,000 mentions of “Jews,” almost 25,000 of “Rothschild;” and thousands of other, various anti-Semitic slurs.

Despite all of these examples of their own bigotry in action, Q followers continue to see their movement as a race-blind community where anyone is welcome (“patriots have no skin color”), as long as they’re open to “thinking for themselves.” The anti-Semitism from major Q promoters is usually explained away or ignored. For his part, Sather claimed that his tweet using triple parentheses was about “global cabal crime syndicates” in general, not Jews in particular, though phrases like “global cabal” also tend to be anti-Semitic codes for Jews. When it is acknowledged, the blame for violent or hateful acts and posts is pinned on a few outliers who are not true Q followers, not the general mass of Q believers.

Overall, the tropes that Q posts and followers perpetuate are centuries old, and were around long before the latest internet conspiracy theory. So why is Gateway Pundit posting this story now, especially when Aplebaum’s blog post went up in June? The site didn’t respond to the Daily Dot’s request for comment, but Q is enjoying more mainstream popularity than ever. Dozens of Q-endorsing candidates are running for national office, and some have won their primary elections. The conspiracy theory is generating national coverage, best-selling books, and a wide array of merchandise. And its promoters are becoming social media stars in their own right. By claiming that whatever anti-Semitism found in the Q movement is artificial, rather than organic, Q’s growing influence in right-wing culture and politics can be shielded from scrutiny—and the rot in the movement can be written off as outside agitators trying to hurt the president, not the people in the movement itself.

But the rot is in the movement.