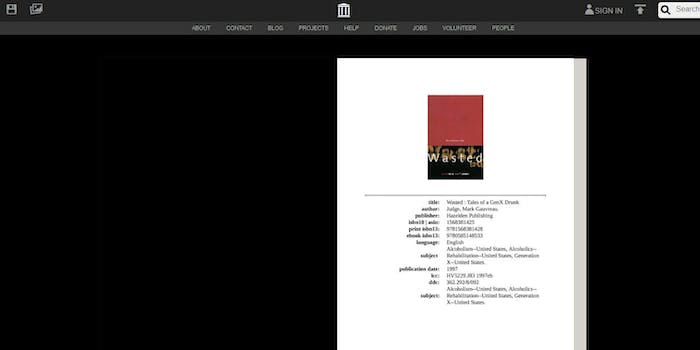 One of the books authored by Mark Judge, the friend of Supreme Court nominee Brett Kavanaugh who Dr. Christine Blasey Ford says was in the room when he allegedly sexually assaulted her, is selling for high prices online–but the Internet Archive is making it available for all to see.

Judge’s book, Wasted: Tales of a Gen X Drunk, is selling for $1,899 dollars on Amazon and bids on eBay are as high as $229 as of Wednesday afternoon.

But, as some people on Twitter spotted, the book is available, for free, on the Internet Archive.

Wasted, released in 1997, was written after Judge entered Alcoholics Anonymous and (as one book critic at the New York Times pointed out) is “not even close to being a good book.”

The book became relevant, however, after Sen. Patrick Leahy (D-Vt.) questioned Kavanaugh about a character who appears in the book named “Bart O’Kavanaugh.”

“Are you the Bart O’Kavanaugh that he’s referring to? Yes or no?” the senator asked last week.

“You’d have to ask him,” Kavanaugh responded.

Kavanaugh called the book “fictionalized,” and said he “picked out names of friends of ours to throw them in as kind of close to what, as characters in the book.”

Judge was not brought to Kavanaugh’s hearing to testify before the Senate Judiciary Committee last week, however, his lawyer reportedly said he was interviewed as part of a probe that was spurred after Sen. Jeff Flake (R-Ariz.) asked for one.

Oh, and in case you were thinking about shelling out hundreds of dollars for the book instead of reading it online for free, you should be warned—it only has a 2.4/5 rating on Goodreads.