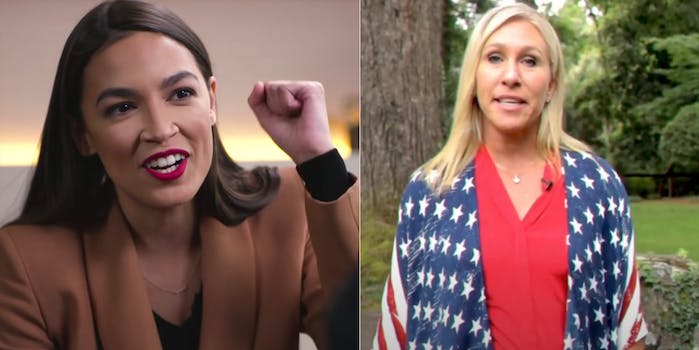 Greene tweeted that Ocasio-Cortez makes blondes look smarter. But, she spelt “single-handedly” wrong as part of her attempted joke.

“As a blonde woman, I would like to take a moment to thank Congresswoman @AOC. She has single handily put an end to all ‘dumb blonde’ jokes. Blondes everywhere appreciate your service and your sacrifice!” Greene tweeted.

“Don’t worry Mrs. Greene, I completely understand why you need to swing + miss at my intellect to make yourself feel better,” Ocasio-Cortez tweeted. “You seem to have some trouble spelling your own insults correctly. Next time try ‘single-handedly,’ it’ll work better. Good luck writing legislation!”

Greene tweeted the missed insult on Sunday and still has it pinned to her page. She tweeted back at Ocasio-Cortez defending herself by adding that “no one cares about typos.”

Greene won her party’s nomination in the Georgia primary. She has mainly been in the news for pushing QAnon conspiracy theories and for expressing anti-Muslim sentiment, according to NPR. President Donald Trump has endorsed her, calling her a “future Republican star.”

Many on Twitter saw the New York lawmaker’s response as a dunk on Greene’s failed shot attempt.

“Damn,” one person tweeted with the Axios reporter meme.

“Perhaps she needs an example of how to use ‘single-handedly’ in a sentence: Example: AOC single-handedly embarrassed Marjorie Taylor Greene on Twitter,” another added.

“Single handily? Guess what it looks like when you fail that hard on a dunk attempt?” someone tweeted with a gif.

This isn’t the first time Greene has used social media to come after Ocasio-Cortez.