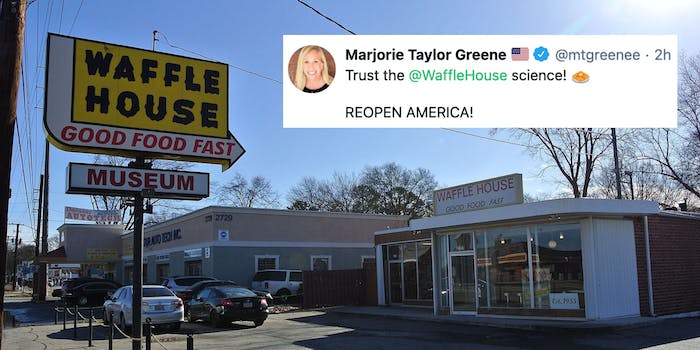 This congresswoman is letting Waffle House dictate her feelings on coronavirus

Marjorie Taylor Greene, the QAnon-believing conservative who was recently elected to represent Georgia in Congress, wants Americans to trust Waffle House for accurate science on coronavirus.

In a now-deleted tweet, Greene on Monday pointed to an article from Fox Business in which Waffle House’s CEO pushed back against business closures by claiming that his establishment had not been linked to any infections.

Greene, who has espoused anti-mask views and other conspiracies regarding the pandemic, was immediately mocked for favoring a waffle-based restaurant chain over actual scientists.

Incredibly, Greene not long after sent out a second tweet featuring the same article in which she again defended the so-called science.

The second tweet was mocked and criticized even more ruthlessly than the first, with users diving into the comments to denounce Greene’s remarks.

“If the CEO of Waffle House says it, then by golly, it must be true. All 3000 people who died yesterday & will die everyday this week are just victims of a bad flu,” @stinkingflower sarcastically said. “I mean who needs the med experts when you have a restauranteur. I WANT MY WAFFLES! #pathetic.”

Supporters of Greene also weighed in and, unsurprisingly, cheered the alleged coronavirus expertise of Waffle House.

Proudly arguing that America should let a waffle company dictate its health policies is very on-brand for Greene, who regularly makes headlines for her outlandish views. Greene is just one of multiple QAnon-believing politicians to be elected to office this year.