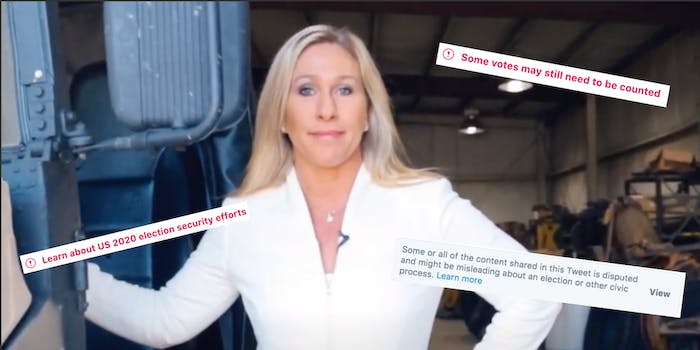 But she can't get any of her tweets by without a warning.

Representative-elect Marjorie Taylor Greene (R-Ga.) kicked off her first few days post-victory by getting over 20 tweets flagged for misinformation by Twitter.

The soon-to-be congresswoman was elected just days ago on Nov. 3. She shot into national discourse for avidly supporting QAnon conspiracies and earning shout-outs from President Donald Trump. Over the past few days, she went on a tweeting tirade claiming that Democrats are stealing the election.

Twitter is not letting her tweets slide by without a stamp calling them “misleading.”

“Let’s check in on the newly elected QAnon member of Congress,” one person tweeted along with a screenshot of Greene’s blocked tweets.

Greene tweeted “stop the steal” or something to that effect 25 times since Nov. 3. Twitter blocked 20 of those tweets.

Greene expressed anguish about her now flagged tweets. She posted a screen recording of her account and wrote: “Twitter censored me ALL day yesterday. Sign your Official STOP THE STEAL PETITION ->.”

That tweet was also flagged for 2020 election security reasons.

Twitter keeps the posts up because they believe “it is in the public’s interest for the tweet to remain accessible” despite them being “disputed and might be misleading about an election.”

Here are a few of her number of tweets that have been flagged.

“Democrats are ACTIVELY stealing this election. I need you to immediately join the fight to STOP THE STEAL!” she tweeted.

“STOP THE STEAL!” she posted.

“The Democrats aren’t even try to hide it. STOP THE STEAL!” Greene wrote.

Most of the notices read “some votes still need to be counted” just under Greene’s claims that Democrats are stealing the election.