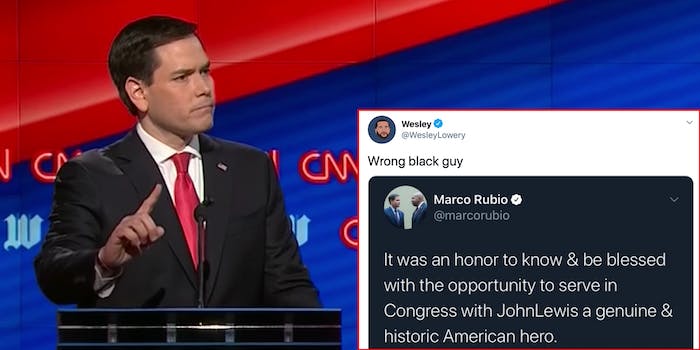 Tweets in memoriam of John Lewis, U.S. Congressman and Civil Rights icon, have been pouring in from Democrats and Republicans alike after news broke of his death Friday night.

While it’s bad enough that some of the comments read as nothing more than lip service from politicians who continue to fight against everything Lewis stood for, Sen. Marco Rubio (R-Fla.) took disrespect to a whole new level when he commemorated Lewis’ life by tweeting a photo of himself with Elijah Cummings.

“It was an honor to know & be blessed with the opportunity to serve in Congress with JohnLewis a genuine & historic American hero,” Rubio wrote in the since-deleted tweet. “May the Lord grant him eternal peace.”

Rubio even made the photo his avatar for a short time.

Lewis represented Georgia in the House of Representatives for over 33 years, whereas Cummings, who died in October 2019, represented Maryland in the House for 23 years. Rubio has worked in the other chamber of Congress, the Senate, since 2011.

The gaffe was immediately noticed by people on Twitter, who wasted no time in correcting the insulting slip.

After Rubio deleted the tweet, others quickly jumped in to inform him of other Black men he has been photographed with, who are not, in fact, Lewis, so that another horrifying mistake wouldn’t be made.

And people added a few photos of “Rubio” himself, for good measure.

Rubio’s team eventually located a YouTube video of him with Lewis and uploaded that instead with a nod to the previous error. And yes, he also made the screencap his avatar.

But the internet is forever, and almost every single response to Rubio’s latest tweet is continuing to clown on him for having so little respect for either man that he apparently couldn’t even tell the difference between them.