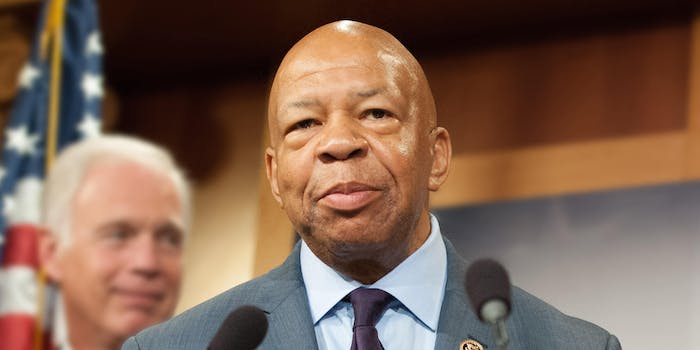 People were not having it after their feud.

In the wake of sudden news of his death, members of Congress and other politicians shared their condolences for the representative, whom many considered a friend and man of integrity.

Rep. Mark Meadows, a Republican from North Carolina, who had a longtime friendship with Cummings, said he was “heartbroken” and that he would “miss him dearly.”

There was no stronger advocate and no better friend than Elijah Cummings. I am heartbroken for his wonderful family and staff—please pray for them.

I will miss him dearly.

Rep. Dan Crenshaw (R-Texas) had kind words as well, calling him a “dedicated public servant and a good man.”

Rest in peace Elijah Cummings, a dedicated public servant and a good man. I pray for his family, loved ones and staff during this difficult time.

Hillary Clinton said that the nation lost a “giant.”

America lost a giant with the passing of Rep. Elijah Cummings, a man of principle who championed truth, justice and kindness. He fiercely loved his country and the people he served. Rest In Peace, my friend.

My warmest condolences to the family and many friends of Congressman Elijah Cummings. I got to see first hand the strength, passion and wisdom of this highly respected political leader. His work and voice on so many fronts will be very hard, if not impossible, to replace!

Trump sent his “warmest condolences to the family” of Cummings and tweeted that he got to see the “strength, passion and wisdom of this highly respected political leader” first-hand.

Which is a stark contrast to Trump’s words for Cummings over the summer. The president spent a whole week in July and August ripping into Cummings, calling him a “brutal bully,” saying his district was “disgusting,” and insinuated that he was corrupt.

Trump also called him racist and gloated when Cummings’ house was robbed in the midst of their one-sided online feud.

If racist Elijah Cummings would focus more of his energy on helping the good people of his district, and Baltimore itself, perhaps progress could be made in fixing the mess that he has helped to create over many years of incompetent leadership. His radical “oversight” is a joke!

Really bad news! The Baltimore house of Elijah Cummings was robbed. Too bad!

The condolences were met with immediate pushback online.

Everyone knows he doesn't have the compassion or the grammatical skills to write this https://t.co/KV8RVBI0iN

I'll take "Tweets on the Trump feed not written by Trump" for one thousand Alex https://t.co/I2U0g29Ow2

Given his recent, nasty insults of Rep. Cummings, my guess is that Trump’s feeling the impeachment heat and decided that a wise course now is to do (no doubt with a literate staffer’s help) his best imitation of a normal human being. https://t.co/lr71cDvpR6

Cummings headed up the House Oversight Committee, which when Democrats took power in January 2019, began investigating corruption within the Trump administration. This likely sparked the president’s ire.

Cummings was first elected to Congress in 1996, serving Baltimore for over 2o years.