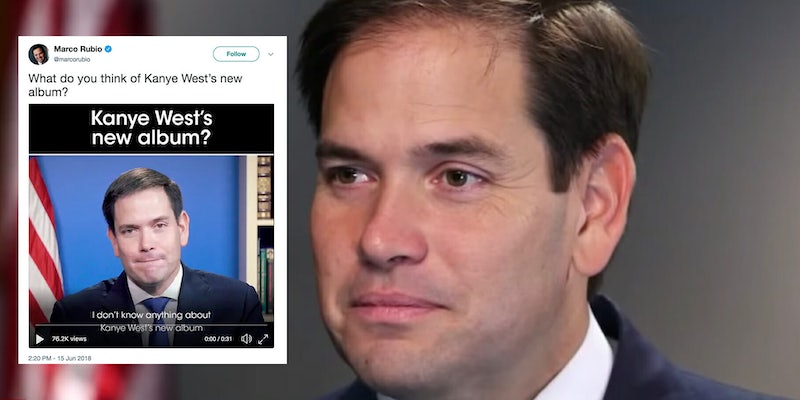 Marco Rubio tweeted a video Friday in an obvious attempt to appeal to young voters—despite the fact that he’s not up for reelection until 2022, Vice pointed out.

But even stranger than the timing of a campaign video was its subject matter: The 47-year-old Florida Senator spent 30 seconds discussing Kanye West’s new album even though he hasn’t even heard it.

What do you think of Kanye West’s new album? pic.twitter.com/w1207wVgZ0

“I don’t know anything about Kanye West’s new album,” Rubio says, which seems reason enough to not make the video in the first place.

But he goes on to say West is “an interesting guy” and that he’s “in the middle of that Pusha T and Drake fight.” That’s where Rubio stumbles over his words, as he clearly has no idea what he’s talking about.

“That whole thing is complicated,” Rubio says. “Bottom line isn’t I haven’t heard it but I, uh, I know it’s out there.”

He then suggests—to himself, I guess—that the White House might have a copy of West’s Ye he can get ahold of. But luckily for Rubio, the album is out and even available on Spotify.

So maybe Rubio can bring up more pressing matters to the White House.

What do you think of having families separated because they are seeking asylum and safety in the US?