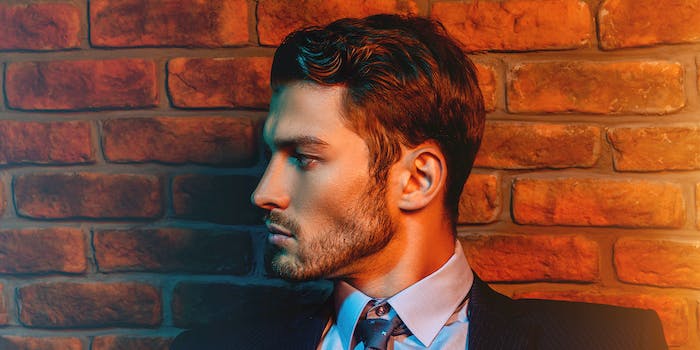 Just as there is no fixed label for men’s wellness today—are we calling it “grooming”? “Male beauty”?—there are various, sometimes opposing forces behind this categorical spread. Have slackening gender norms enabled more men to adopt wellness? Or is it just conspicuous consumption migrating to untapped groups? The latter interpretation finds support in a group associated more with calamity than wellness: incels.

Incels, men who believe that woman are willfully denying them sex, have their own term for wellness: “Looksmaxxing.” In whatever form it takes—facemaxxing (also called “mewing”), dickmaxxing, hygeinemaxxing, to name a few—looksmaxxing points to an ideological split among incels: red-pilling vs. black pilling. Those who take the proverbial black pill accept their inferiority as immutable. Looksmaxxers are de facto red-pillers: They see themselves as salvageable. Granted, their so-called growth is woefully single-minded and mechanistic—hence taking an imaginary pill as a fundamental prerequisite. But in dialogue with the Instagram algorithm, aren’t we all similarly bifurcated? We feed it our basic instincts, and it reflects back a world that looks something like ours, only better.

Caught mid-scroll, we all look a bit like looksmaxxers. Of course, brands don’t call it that—instead it’s “self-care,” “self-love,” etc. Despite ubiquitous messaging to the contrary, there is nothing inherently loving or virtuous about this process, as evidenced by the patrons of the online forum Looksmax.me. A bit like Goop meets 8kun, the website gives self-hating alt-dandies a place to air both backward social politics and product reviews. Despite rampant queerphobia—the site’s code of conduct bans “trans or gay content of any kind”—thread topics include “Rate KJ Apa’s physique out of 10!” and “How big are your balls?” As if to curb further cognitive dissonance, looksmaxxers approach self-care with chapter-and-verse technicality. Very white teeth are not “white,” they are “B1 shade” On one thread discussing IDP, or “interpupillary distance,” user feedback careens as such:

Far from unique in their allure, the traits Looksmaxxers brood over—muscle tone, jaw shape, teeth shade, etc.—basically amount to a conventionally attractive man. In incel parlance, this man goes by a fittingly prosaic brand name: “Chad.” Just as incels’ insecurities are real, in that plenty laypeople share them, Chad is not (generally speaking) some cartoonish final boss. Looksmaxxers didn’t invent Chad; he was a readymade trope.

Advertising has always equated consumption with sociocultural dividends. The added value of men’s wellness, according to many of its gatekeepers, is alpha-male status. Some brands convey this by grafting masculinism directly onto their products. Others appeal more subtly to the male id, à la this men’s skin “strengthening” serum. In any event, with the popularization of the male-beauty industry, the specter of Chad looms large.

Thus the line between everyday “wellness” and looksmaxxing is often a fine one, as the Brand/Consumer feedback loop seems to bear out. The aforementioned serum, for example, attracts a customer who also seeks out LED teeth whiteners and cosmetic procedures by a “tear trough” filler specialist—interventions comporting to a Chad-like standard. The loop plays back with odd transparency on Looksmax.me: One OP boasted about paying hundreds for the premium teeth-whitening system Enlighten Evolution, only to be dragged. He eventually conceded, “Fair enough. I’ve overpaid…I’ve fallen victim to marketing, just like billions of others around the world do everyday [sic].”

In their long, fraught relationships with oral fitness, the incel and advertising sects are strange bedfellows. Toothpaste became a household staple in the early days of mass marketing—not for its health benefits, but because advertisers framed its pleasant taste as a secondary benefit of brushing. This history of benign quackery intersects with toxic incel culture in the practice of “mewing”— named for delicensed orthodontist Dr. John Mew. For decades, Dr. Mew has espoused his belief that society’s insidious erosion of masculinity has in turn shrunk men’s jaws. And that, through unproven techniques, one can reverse those effects. Endless fodder for the looksmaxxing forums, Dr. Mew’s theories have been applied to teeth shade, cheekbone height, under-eye fullness, and beyond—any feature touched by this alleged downward trend in genetic-cum-cultural manhood.

Mewing is not the only instance of image status hijacking oral health. Selfie-driven wellness has brought about a renaissance in oral-care disruption, as SNOW founder Josh Elizetxe suggests. “The rise of Instagram really opened the door to challenger brands,” he told me on a call from San Diego. “Consumers want what they see.” Expanding toothpaste’s long line of secondary associations, SNOW has aligned itself as emblematic of the good life via paid Instagram partnerships. As it happens, SNOW’s male ambassadors—MMA fighter Chuck Lidell, football player Rob “Gronk” Gronkowski, and Floyd Mayweather—are also paragons of masculinity.

Disruption in the space has also brought about new, mainstream-ish ways to mew—a prime example of which are jawline enhancers. If you’ve seen sponsored posts by e-merchants like Chisell and Jawliner, you get the gist: Bite-sized resistance pucks, they purport to offer bigger, better jaws through repetitive chewing.

The brands’ marketing mores suggest the choir to which they preach: Chisell’s slogan is “CHISELL your JAWLINE and DOMINATE” (emphasis theirs), while cube-jawed spokesmodels resemble bulkier versions of customers’ before-and-after subjects.

Discussing Jawliner on a recent Zoom call, founder René Ostertag conjured a similar customer demo: Do they slant male or female? “Male.” Do they chew as an alternative to surgery or working out? Yes, some have “never had a weight in their hand,” he offered. And one influencer partner to whom customers responded really well? “Killian Sensei.”

Sensei is a YouTuber and “male motivator.” As I’d learn with the help of a French-speaking friend, his videos hinge on classic incel talking points—alpha superiority, the duplicitousness of women, etc. Ultimately, the tenor of Sensei’s pep talks needed no translation: Scrolling his channel, there is a small red pill scattered throughout his thumbnails.

As the persistent “Chisell vs. Jawline” debate rages on Looksmax.me, some users have grown weary: “Okay, chewingf*gs,” writes @NosecelI, “I believe that you are very bad for this community so I’m going to take a stand against you cunts.” Indeed, appealing to male ids with newfangled wellness solutions can be an awkward balance. Elizetxe, the teeth-whitener entrepreneur, acknowledged a false equivalence in his marketing strategy: “These guys like Gronk…They wear a mouthpiece [in sports]. And [SNOW] happens to be a mouthpiece that whitens your teeth. So that was the rationale in terms of the positioning.” In other words: What does being a big, strong athlete have to do with nice teeth? Nothing. But, “When you think about football players, boxers, MMA fighters … It opens us up to that male audience.”

In tapping a male audience, Snow has also riled up male grievance: A recent $5 million class-action lawsuit by a Long Island man says that SNOW has been “ripping people off,” and that its celebrity promoters perpetuate the false claim that the LED devices work. Since virtually every paid ambassador props up that device in his or her sponsored post, it’s not clear why just two, Gronk and Mayweather, are named as co-defendants. One imagines, perhaps, that the plaintiff simply purchased his $150 whitening kit with those athletes’ testimonials in mind. In this interpretation, the plaintiff’s suit telegraphs another revealing portrait of the male-beauty consumer: sensing defeat, he is quick to cry foul.

When I spoke to Elizetxe, he was headed for the annual B2B summit Traffic & Conversion. He was in illustrious company: The day before Elizetxe’s talk, the keynote speaker had been Arnold Schwarzenegger. Schwarzenegger was promoting a new venture—a supplement brand confounded in partnership with LeBron James. Their motto? “There is no magic pill.” Whether or not it gets you to buy protein powder, it’s a sentiment that bears repeating.

Samuel Anderson is a writer currently based in New York. His work has appeared in T, Artsy, Input, Garage, among others.