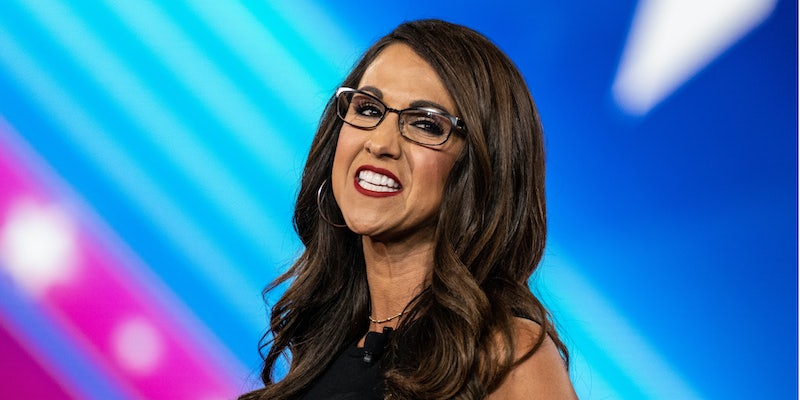 Boebert's being accused of encouraging 'hatred' for LGBTQ people.

Five people were killed and dozens injured in a mass shooting at an LGBTQ nightclub in Colorado Springs, Colorado this weekend. The alleged gunman was arrested and charged with hate crimes.

While police have not yet revealed the exact motive for the shooting, the attack aligns with an increase in anti-LGBTQ violence over the last year. Many blame rhetoric from prominent right-wing influencers and politicians for the rising tide of hate.

In the wake of the shooting, one of Rep. Lauren Boebert’s (R-Colo.) tweets using the groomer slur that has been popularized by homophobic and transphobic social media influencers resurfaced.

Grooming traditionally refers to the way pedophiles lure and coerce their victims. It’s also derogatorily and falsely lobbed at the LGBTQ community to liken them to pedophiles.

Chaya Raichik of the Libs of TikTok account posted the chart and wrote facetiously, “Cool they made a handy chart for some of the best accounts on Twitter who speak out against child abuse.”

Boebert quote tweeted Raichik to express regret that she was “only third” on the list.

“Guess that means I have to tweet about these sick, demented groomers even more,” Boebert added.

Although the Advocate reports that Elon Musk appears to have reversed the platform’s ban on baselessly calling transgender and nonbinary people groomers shortly after purchasing Twitter, Boebert’s tweet still includes a notice that says, “This tweet violated the Twitter Rules about hateful conduct. However, Twitter has determined that it may be in the public’s interest for the tweet to remain accessible.”

Boebert’s tweet resurfaced after she tweeted condolences for victims of the shooting at Club Q, which is in her home state.

“Is this you? Seems the only ‘Grooming’ is you grooming the future murderers of Colorado with your hate,” wrote one along with a link to the tweet.

Boebert’s expression of sympathy for the victims was met with countless accusations that her rhetoric was a contributing factor.

Chasten Buttigieg, whose husband Pete is the United States Secretary of Transportation, wrote, “You encourage this type of hatred. Get off Twitter and start looking inward.”

Several of Boebert’s tweets about LGBTQ people resurfaced after the shooting, such as when she complained about armed guards protecting a kid-friendly drag show in Texas and admonished people to take their children to church instead of drag shows.

In May, Boebert replied, “Okay, groomers,” to PolitiFact’s tweet noting “the term ‘grooming’ has been used to imply people who discuss LGBTQ topics are deliberately preying on children. That’s not what grooming is.”

“This you?” and a screenshot of her previous tweets about LGBTQ people were common responses to Boebert’s tweet about the shooting at Club Q.

Boebert has yet to respond to any criticism.