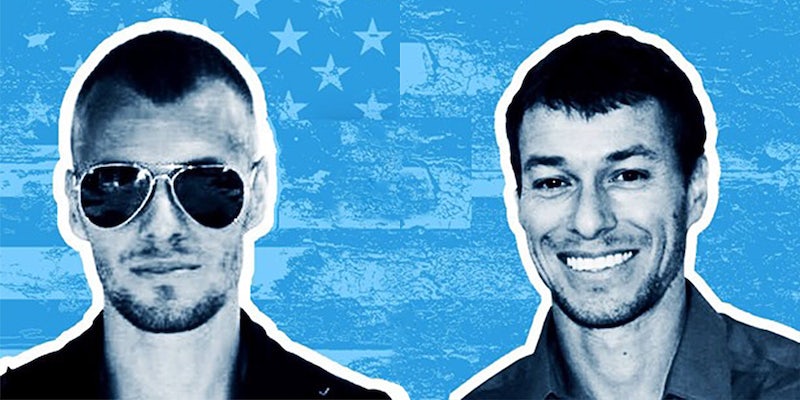 Ed and Brian Krassenstein, twin brothers who were once two of the loudest voices of the anti-Trump resistance, very briefly returned to Twitter today. Their new account, @2Krassensteins, has already been suspended.

“Hello Twitter users, It has been 5 months since we (Brian and Ed Krassenstein) have been banned from Twitter. Twitter never gave a specific reason for our ban, but rather just released a blanket statement…,” they began, adding in subsequent tweets, “The odd part about all this is that 1) Twitter never directly said that we did these things, and they refused to do so when the media questioned if we did. 2) Twitter allows users to use multiple accounts, and it is not against their terms of service. 3) we absolutely never purchased any accounts or account interactions. With this said, however, Twitter as a private company, has the right to ban whoever they want for whatever reasons they want.”

Until they were permanently banned from Twitter in May, the Krassensteins were probably the fastest draws on the President Donald Trump troll train. Nearly every time Trump tweeted, one or both of the twins jumped on it with a scathing, if repetitive, criticism.

This single-minded focus coupled with following hundreds of thousands of similarly minded people enabled them to grow a huge following in a relatively short time. When their accounts abruptly disappeared, they’d each amassed roughly 925,000 (Ed) and 697,00 (Brian) followers.

They were permanently banned in May for, according to Twitter, violating its rules, running fake accounts, and buying interactions.

“The Twitter Rules to apply to everyone,” a Twitter spokesperson told the Daily Dot at the time. “Operating multiple fake accounts and purchasing account interactions are strictly prohibited. Engaging in these behaviors will result in permanent suspension from the service.”

The brothers have consistently denying buying interactions or operating fake accounts. Ed later told the Daily Dot that he wasn’t bothered by the suspension, so much as how Twitter went about it.

“I don’t have any grudges for suspending me, I have a grudge against Twitter for the way they handled it and that they put out this statement that led to the media claiming that we were running bot farms and botnets and purchasing interactions, which we weren’t doing,” he said.

Since May, they’ve contented themselves with Facebook, where they have a comparatively paltry 60,000 followers. Apparently unable to resist any longer, this morning, they announced their return in an extremely lengthy Twitter thread. They confirmed this on Facebook.

In the thread, the pair admitted they’d probably been “trolls,” but denied being grifters, as many have called them. They also said that the media didn’t like them because they were jealous.

“The media never liked us, and we honestly don’t blame them,” they wrote. “We were able to build such a large following and get more exposure after just a year of tweeting than many journalists had been unable to get over their careers. It was kind of unfair, and we admit it.”

As of press time, neither Twitter nor the Krassensteins had responded to the Daily Dot’s requests for comment.

The Krassensteins conceded that they’d posted about wanting to buy accounts, but said that was nine years ago before it was prohibited, and that they hadn’t managed to buy any, anyway. During this time they were attempting to build a social networking site; it failed, but when Trump was elected years later, they still had the large accounts. So they started using them to troll or, as they call it, “amplify our voices.”

“After having not tweeted with them for a couple years, and seeing how President Trump had taken to Twitter so significantly, we decided to use these accounts to amplify our voices and speak up for causes we believed in. In doing so, both of us changed the names of our Twitter accounts, first to accounts with names that showed our displeasure with Trump, and then several months later to our own personal names.”

It worked bigly. It probably didn’t hurt that they were following “nearly 1,000 other anti-Trump Twitter accounts daily.” They concede that it might’ve been “a bit deceptive,” but claimed that they didn’t violate any of Twitter’s rules. This deception, they opined, was the real reason they got the boot.

“We believe it wasn’t Twitter’s motive to remove us, but rather it was their motive to remove the large accounts that were created by us in a bit of a deceptive fashion,” they wrote. They said they were sending Twitter a letter to that effect. Guess that didn’t turn out so well.

Somewhat offhandedly, the brothers also noted that they sold HillReporter.com a few months ago. According to an Oct. 10 post on HillReporter.com, the new owner is Roman Romanuk. A LinkedIn page for Romanuk, which has the same profile picture as used in the announcement of the change of ownership, says that he’s the CEO of Prezna, which provides a dashboard for managing online ad campaigns, and owns other web properties, including Funnyand.com. Romanuk did not immediately respond to an email sent to the address on his LinkedIn page.

The Krassensteins aren’t done with Trump, however. They claimed to be working on “uncovering corruption involving three Middle Eastern nations, which we believe will make Ukraine seem like a parking ticket to President Trump.”

Within hours of the Krassensteins announcing their triumphant return, @2Krassensteins was suspended. Womp womp. As they’ve been banned—again—anyone interested in the scoop will just have to follow them on Facebook.

“They already banned you. It was weird watching them delete your tweets as I was reading them,” one of their Facebook followers commented.