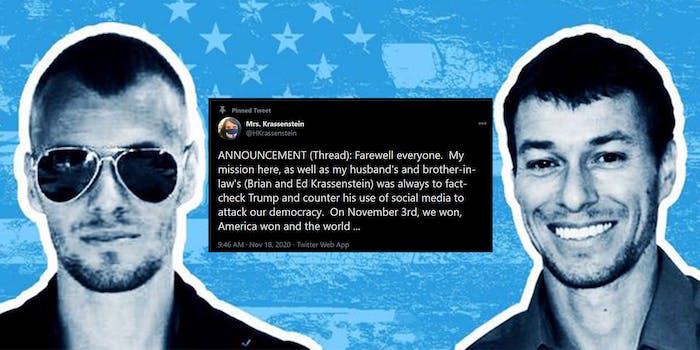 A number of factors must be considered when analyzing President Donald Trump’s loss to Joe Biden in the 2020 election, the first incumbent to be defeated since 1992.

There is the crushing and worsening coronavirus pandemic, which killed 250,000 Americans and the president has choosen to essentially ignore. There is the president’s re-election strategy, which centered on lobbing invective at unknown figures on Twitter instead of pushing for economic relief. And there’s the widespread dislike of the man, who had the lowest approval rating of a sitting president in some time.

But we must not discount people replying, “You sir, are wrong,” to his tweets. In the wake of Trump’s election, a cottage industry of reply guys cropped up, who built astoundingly large social media following by @-ing the president on Twitter and expressing umbrage at whatever news of the day they considered treasonous was floating through the online wind.

“RT this if you think @realdonaldtrump shouldn’t interfere with Mueller and the Russia probe.”

Did those tweets make a difference? No.

But the most infamous of these posters, the Krassenstein brothers, have declared mission accomplished and called it quits.

That’s right, the twin brothers who gained millions of followers for being mad at Trump for ignoring norms, wound up being pegged as grifters (though they strenuously deny the allegations), got kicked off Twitter, returned under the auspices of one of their wives, and ran a smear campaign against a woman coming forward with a sexual assault allegation against Joe Biden, have declared mission accomplished and are logging off.

The announcement came from their wife (who never really said which one she was married to, and had an uncanny knack for matching their exact cadence and tone, leading people to suspect it was just them running the account.)

“ANNOUNCEMENT (Thread): Farewell everyone. My mission here, as well as my husband’s and brother-in-law’s (Brian and Ed Krassenstein) was always to fact-check Trump and counter his use of social media to attack our democracy. On November 3rd, we won, America won and the world … won as the President lost in what he’d call a “landslide”. I am taking a break from social media, perhaps forever, as I feel the onslaught of lies will gradually wain from here,” Mrs. Krassenstein (first name never disclosed) wrote.

She continued on to say that the duo, despite accusations, were never grifters and all the money they made over the years has been donated.

“We were called ‘grifters,’ yet never ‘grifted’ a soul. We donated literally every penny we brought in through Twitter to charities and causes which are important to us. We are involved in numerous lawsuits for defamation as well as in legal talks with Twitter over their … patently false and defamatory claims regarding Brian and Ed’s Twitter ban in 2019. You will likely hear more about this in the news in the near future,” she continued in a lengthy thread that went on to call disinformation the most pressing crisis facing the future of democracy.

“My final word to all of you is that, as a nation, we must put an emphasis on fact-checking, sourcing and discredited blatant and not-so-blatant conspiracy theories. Lies are the weapons used by those who want to deceive the world for power,” she wrote.

Which, given that that disinformation has not abated in the wake of Trump’s loss, you may think they’d want to continue this good fight. But if your entire brand is anti-Trump, and he’s about to be gone, whatever post hoc justification you can make after you bail out right when it ends won’t do anything to quell the accusations that, well, it was all a grift.