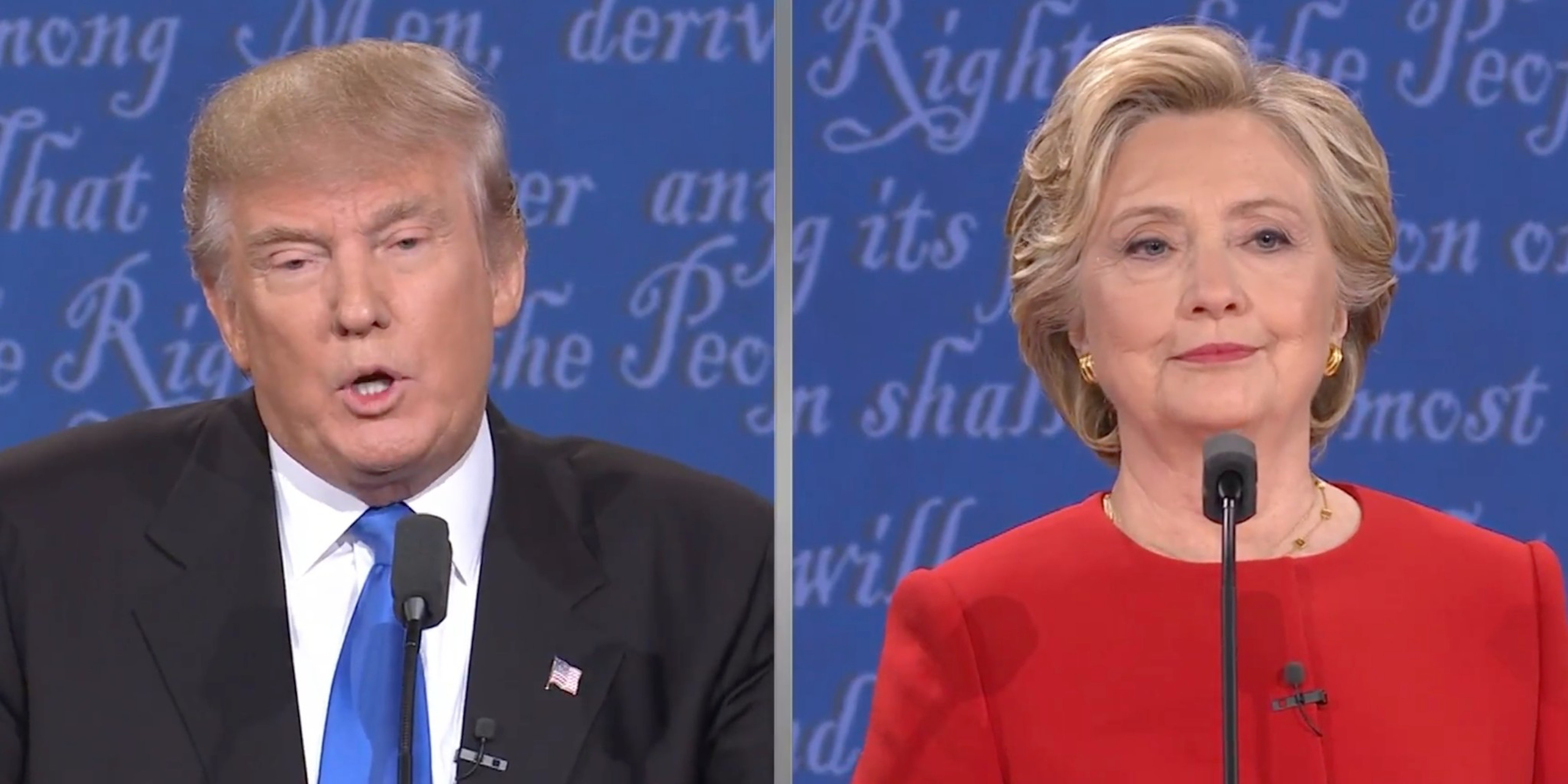 The 7 key moments from the first presidential debate of 2016

Trump and Clinton talked about income equality, national security and... the elephant in the room.

The first presidential debate of 2016 was 90 minutes of the two major-party candidates going unabashedly head-to-head on free trade, crime, and the economy—and each other.

Neither Donald Trump nor Hillary Clinton were afraid to punch low, with both raising transgressions on race and the economy in each other’s career that were decades old but today hold a new relevance. Trump bought up the Bill Clinton administration’s track record on the North American Free Trade Agreement (NAFTA) as well as the fact that Clinton once referred to young black men as “super predators” in the 1990s. Clinton reminded America of Trump’s track record on housing discrimination against African-Americans and subsequent Justice Department lawsuits in the 1970s, as well as his refusal to release his tax returns.

Twitter released a graph on the Monday night debate indicating that Trump dominated the lion’s share of discussion on Twitter. The consensus among media and political pundits is that Clinton won the debate. 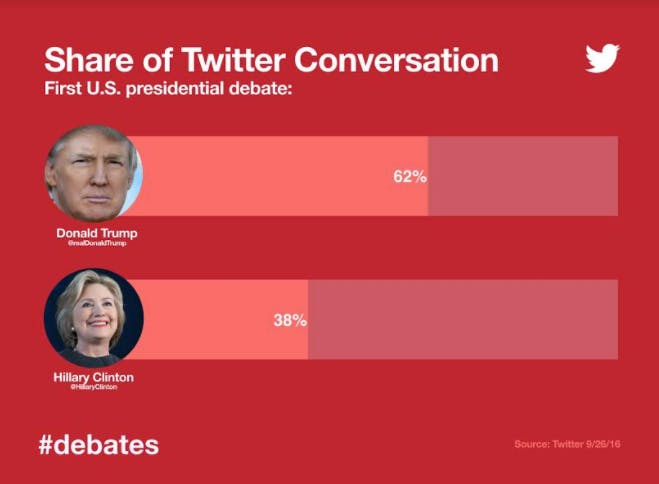 According to Twitter, the top three most-tweeted-about moments during the debate included an exchange toward the end, when Clinton pressed Trump on lying about supporting the Iraq War. Trump insisted he had better judgment than Clinton, as well as a better temperament. This comment garnered a laugh from the college-aged audience at Long Island’s Hofstra University, where the debate was held.

Trump’s comments that stop-and-frisk was an effective policy strategy to fight crime and a heated exchange between Clinton and Trump on ISIS were the other two events that most preoccupied Twitter. 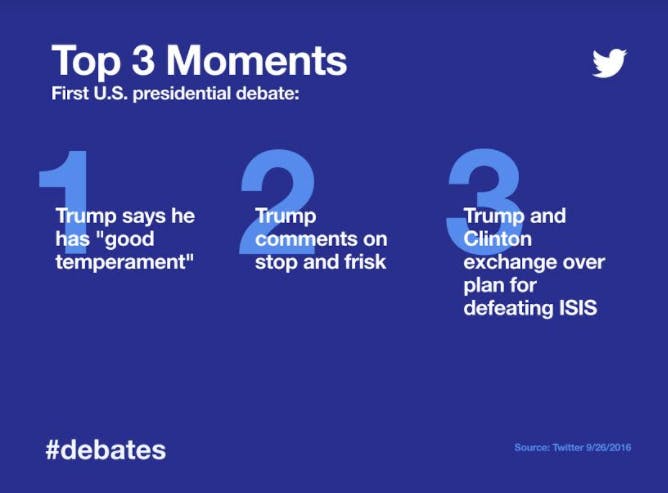 Hillary Clinton lead the way in terms of Google searches, with the former secretary of state claiming around fifty-five percent of the searches on Monday night according to Google Trends.

Trump’s use of a word that doesn’t exist—’braggadacious’—to defend his finances earned a fact-check on Twitter from Merriam-Webster. The dictionary went on to say on Twitter that it believed the word Trump was looking for was braggadocio, which means “boastful or arrogant behavior.”

But those aren’t the only big moments from Monday night’s political showdown. Here are our picks for the five most notable moments from the first presidential debate of 2016.

1) Clinton: “He started his business with $14 million borrowed from his father…”

Every time Clinton has gone after Trump so far — on the loan his father gave him and wanting the recession — he’s responded.

Clinton took the first swing of the debate by casting light on the myth of Trump’s self-made success. Trump has said often that his father gave him “a very small loan” in the 70s, which he used to make his millions.

“You know, Donald was very fortunate in his life, and that’s all to his benefit. He started his business with $14 million, borrowed from his father,” said Clinton. According to the Wall Street Journal, that is true.

2) Clinton pushes back on NAFTA: “Well, Donald, I know you live in your own reality.”

When Trump and Clinton clashed on free trade deals, things quickly got tense. Trump accused Clinton of not having done anything on free trade during her time as senator of New York or secretary of state. He then called the Clinton administration’s signing of NAFTA “one of the worst things that ever happened,” and grilled Clinton for supporting the Trans-Pacific Partnership (TPP), a position she’s since backed away from.

“Donald, I know you live in your own reality, but those are not the facts,” Clinton said. “The facts are, I said I hoped it would be a good deal, but when it was negotiated, which I was not responsible for, I concluded it wasn’t.” Trump was correct, however, in saying that Clinton claimed the TPP would set the “gold standard” in trade deals, among other praises.

Both candidates attacked each other for their strategies on combating the Islamic State—or lack thereof. Trump declared that by publishing a strategy to fight ISIS on her campaign website, Clinton was threatening national security. Clinton retorted, “At least I have a plan to fight ISIS.”

Trump then said something completely nonsensical that was lampooned by Twitter in seconds: “You’ve been fighting ISIS your entire adult life.”

4) Trump on not paying income taxes: “That makes me smart.”

In a revealing back-on-forth on why Trump refuses to release his tax returns, the real-estate mogul dodged Clinton’s allegation that Trump was hiding tax fraud. Clinton pointed out that Trump did not pay any federal income taxes, according to tax returns he turned into Nevada state authorities, when applying for a casino license.

“The only years that anybody’s ever seen were a couple of years when he had to turn them over to state authorities when he was trying to get a casino license, and they showed he didn’t pay any federal income tax,” Clinton said.

Trump quickly retorted: “That makes me smart.” Many viewed this as an admission that he has continued to pay no federal income tax.

Moderator Lester Holt asked the candidates what they would do to better race relations between police and minorities communities. Trump’s answer? “We have to bring back law and order.” Trump proposed bringing back stop-and-frisk, a crime-deterrent policy that was ruled unconstitutional in New York in 2013.

After Holt fact-checked Trump on the spot, refuting his claims, Trump interjected.

“No, you’re wrong,” Trump said to Holt. “It went before a judge who was a very against-police judge. It was taken away from her and our mayor, our new mayor, refused to go forward with the case. They would have won an appeal. If you look at it, throughout the country, there are many places –”

Attorney General Loretta Lynch set the record straight this week on why stop-and-frisk failed as policy in New York City.

“In New York … that practice was implemented in a way that was not helpful to community trust and to, frankly, public safety and enhancing the relationship between law enforcement and community members,” Lynch said at a press conference.

6) Trump on birth certificate drama: “I think I did a great job.”

Holt brought up Trump’s years-long history of questioning President Barack Obama‘s citizenship status. Trump answered by saying he thought he did a great job and a service to the country by making public demands for the president to release his birth certificate, which Obama eventually did in 2011.

After Trump’s defense went on for a few minutes, Clinton countered with “Well, listen to what you just heard.”

Two quotes from different parts of the debate:

Clinton delivered her final blow against her rival, who often defends his statements by claiming his words were taken out of context or were intended as sarcasm. Clinton ended on a serious note, saying that many of America’s allies have expressed concern over Trump’s rhetoric to her.

“Let me start by saying words matter. Words matter when you run for president, and they really matter when you are president,” said Clinton. “We have mutual defense treaties, and we will honor them. It is essential that America’s word be good. And so I know that this campaign has caused some questioning and some worries on the part of many leaders across the globe. I’ve talked with a number of them. But I want to, on behalf of myself and, I think, on behalf of a majority of the American people say that, you know, our word is good.”