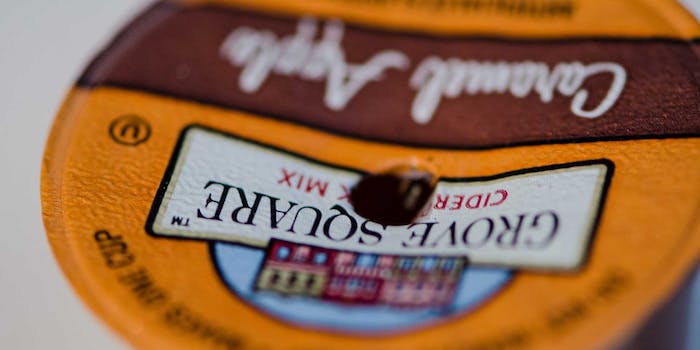 The coffee hack is real, and it is great.

Keurig has been growing exponentially over the past few years. The demand for the single-serve coffee machines and their accompanying k-cups of debatable quality has grabbed hold of the market, and Keurig wants to make sure that it doesn’t lose its grasp.

One of the ways the company has chosen to protect itself is through DRM (Digital Rights Management). After Keurig’s patent on the k-cup expired, off-brands started to undercut the (often ridiculously high) prices on the single serving pods. When Keurig announced its latest machine, it also made it clear that off-brands weren’t welcome and that its pods were the only ones that would work with the machines.

But you should never underestimate a caffeine-deprived coffee fiend. Armed with nothing but a pair of scissors, some tape, and the perfect soundtrack, one ingenious coffee drinker found a physical workaround for the DRM.

All it takes is cutting the identifying tag off the top of a discarded official pod and taping it inside the machine. The scanner reads it, registers it as the real deal, and proceeds to pour you a cup that tastes all the sweeter because you fought the The Man. And you won.

This is not the sole Keurig hack, however. The war on Keurig’s DRM has been on-going since its announcement, with enterprising coffee lovers doing whatever it takes to save themselves from being barred from that delicious brown nectar.

TechnologyGuy posted a guide on Instructables.com that utilizes a similar technique in Keurig trickery, only its geared toward those who prefer to use the DIY cups.

With an x-acto knife, he suggests, cut under the lip of an official k-cup. Sand down the edges and cut out the middle portion so you just have the ring and a part of the label. Use a dab of epoxy to permanently fasten the ring to your refillable cup and you can have the coffee of your choice any time.

A YouTuber managed to unlock the full menu of options on the Keurig 2.0 machine, making it possible to serve up any size of cup—even beyond the k-cup limit of 10 ounces. It also gives access to a “favorites” feature and a variety of other settings not usually accessible.

All it takes is sticking a tiny magnet under the hood, which tricks the machine into thinking the factory magnet has been moved—an action that happens when a Carafe cup is in the machine.

The full menu hack is possible even if you don’t have a magnet available. You’ll have to remove the entire housing for cups from the Keurig machine,  take out a screw and play around with the latch and spring mechanism adjusts to different cup sizes.

These hacks are great, quick fixes to get full functionality out of your Keurig machine, but users aren’t the only ones setting out to beat DRM. The makers of the competing cups are already cracking Keurig’s system. By the time Keurig officially discontinues the earlier models of its machine that brewed without discrimination, the Keurig 2.0 will be just as open a platform. Albeit, at the hands of hackers’ ingenuity.