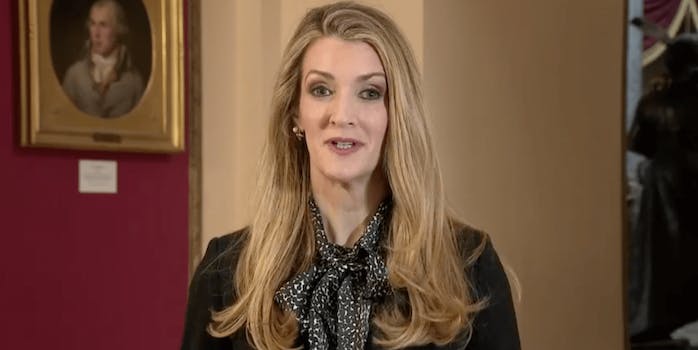 She is maybe not the best messenger right now.

Congress is mired in a fight over how to offer relief to hundreds of millions of Americans who are struggling in the wake of business and city-wide shutdowns over the coronavirus pandemic.

The fight in Washington is over how much money goes directly to citizens, how much goes to businesses, and whether the money given to businesses will be used to help workers, as opposed to CEOs and other well-payed executives.

Last night, Senate Democrats blocked a $1.8 trillion bill because they said the relief effort didn’t oppose enough restrictions on corporations, like preventing them from using the money to buy back stock, instead of halting layoffs.

Democrats are united in saying a quarter of the bill—$500 billion—is a “slush fund” that would do nothing to help the average American.

And Sen. Kelly Loeffler (R-Ga.) was furious that Democrats didn’t willingly join her Republican colleagues in passing the bill.

“JUST NOW: Democrats put their agenda before the health and well-being of the American people. They voted against advancing relief to hardworking families, hospitals, small businesses and their employees. Now is a time for unity and swift action, not politics as usual,” Loeffler tweeted.

Strong words, which were met by strong words from, oh, just about everyone on the internet who didn’t want to hear Loeffler opine about what the average American needs.

Because Loeffler—who wasn’t voted in, but appointed to her seat in January—is being accused of insider trading, after dumping stock in the wake of a classified coronavirus briefing.

Loeffler, along with several other Senate colleagues, dumped massive amounts of stocks just before the pandemic hit the U.S., and the stock market completely collapsed.

All the while, she downplayed the pandemic on Twitter.

So the words of someone who felt they needed to hoard millions in advance of a global shutdown don’t carry much weight.

In fact, it was downright maddening to many that someone who is pushing for a bill that would grant less than $2,000 per person, would claim to know what the average American needs.

It may not be the most ratioed tweet of all time, but it’s an early contender.

Loeffler has denied the allegations vehemently.

Democrats are currently preparing a rebuttal bill to the Republican Senate’s offering.