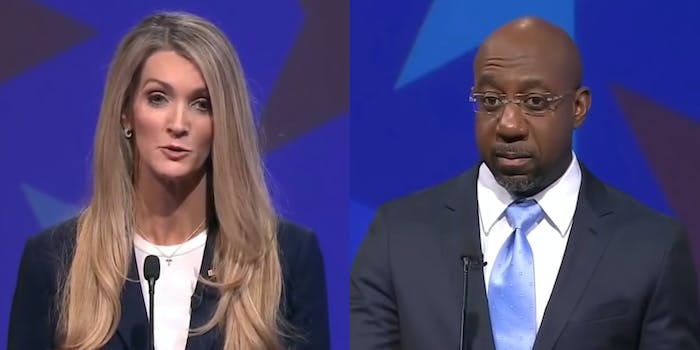 She dodged the question several times.

Warnock and Loeffler are battling for one of two Senate seats in Georgia’s runoff election. Jon Ossoff and Sen. David Perdue (R-Ga.) are vying for the other one. The results of those two runoff elections will determine the makeup of the Senate during President-elect Joe Biden’s early tenure in the White House.

Meanwhile, Trump has fixated on the Georgia election results, which Biden won after a recount.

Loeffler and Warnock debated each other on Sunday night, where the Georgia Republican repeatedly refused to acknowledge that Trump lost he election.

Warnock asked Loeffler directly to answer “yes or no” whether Trump lost a “recent presidential election.” Instead of answering the question, Loeffler responded by saying that the president had “every right to use every legal resource available” to challenge the results.

The Georgia senator was also pressed by the moderator, who asked her “If everything is at stake on January 5th,” the date of the runoff election, “that would presume that President Trump has lost.”

She responded by dodging the question, saying that “what’s at stake is the Senate majority.”

Meanwhile in the other Georgia runoff election, Perdue did not attend a debate against Ossoff, leading to the Democrat debating an empty podium.