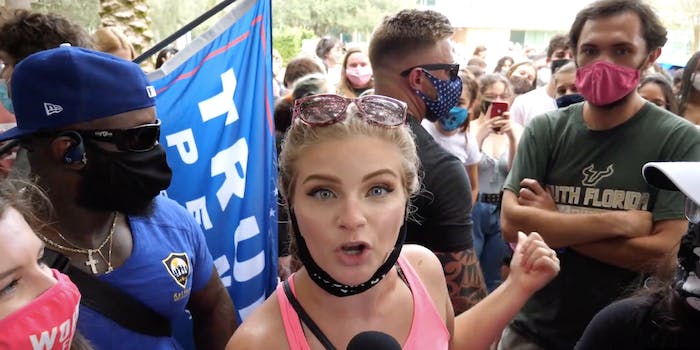 Bennett went to USF to start s**t, but she couldn't take it.

Kaitlin Bennett—aka “Kent State Gun Girl”—ignited controversy on Wednesday when she visited the University of Southern Florida and was met with chants of “shit your pants” from protesters.

Bennett drew a huge crowd to the Tampa university, where she invited students to wish President Donald Trump a speedy recovery from COVID-19 and generally did her best to piss off liberal students and goad them into insulting her on camera. She uploaded a 50-minute recap video to Liberty Hangout, the self-proclaimed “libertarian media outlet” that also functions as a platform for Bennett to share self-victimizing clickbait.

Protesters arrived en masse to combat Bennett, who traversed campus wearing a pink “Baby Lives Matter” shirt. Student newspaper The Oracle captured footage of students shouting “Black lives matter” and “I can’t breathe” at the pro-gun provocateur. But social media users latched onto a different excerpt from Bennett’s campus recap, in which a group of protesters swarmed her and chanted, “Shit your pants! Shit your pants!”

The clip was uploaded to the r/PublicFreakout subreddit on Thursday, where it has since received more than 60,000 upvotes.

The “Shit your pants!” chant stems from a rumor reported by Barstool Sports in early 2019 that Bennett once pooped her pants at a frat party. Liberal social media users delighted in the apparent dirt unearthed about Bennett, the gun-toting conservative who has faced accusations of fat-shaming, slut-shaming, transphobia, and anti-Semitism.

Twitter users have taken to calling Bennett “poopy pants,” and in January, comedian and The Daily Show correspondent Jaboukie Young-White revamped his Twitter into a poop-focused Bennett parody account, firing off missives such as, “Hillary lost the election, I lost control of my bowels. But only I have an AR-15.” In February, the #POOPINGFORKAITLIN hashtag also became a top Twitter trend, aided by K-pop stans.

The poop rumors have dogged Bennett since they first surfaced in early 2019, and they will likely continue to do so for as long as she makes a living out of visiting college campuses to start shit (pun intended). Bennett appeared perturbed by the “shit your pants” chant at USF, as she can be heard saying, “I need an administrator right now.”

Bennett took a swipe at the so-called “tolerant left” by titling her USF recap video “College Students Can’t Handle Different Opinions.” But the irony is that Bennett, who has previously blasted the “PC police” for trying to stifle her “free speech,” couldn’t handle a group of students exercising their First Amendment right. A word to the wise for Bennett: Don’t fling shit if you can’t take it.