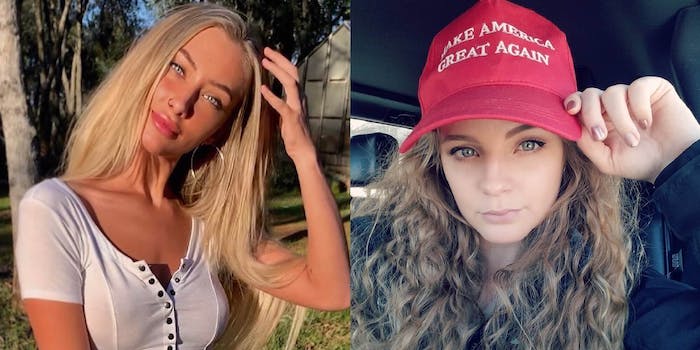 'I volunteer my white privilege for a good cause and that is to throw hands on Kaitlin Bennett.'

An online feud is brewing between two viral internet personalities.

Kaitlin Bennett, also known as Kent State’s “gun girl,” and Kaylen Ward, known more commonly by her online username “naked philanthropist,” are squaring off in each other’s mentions. Their online dispute began almost a month ago when one of Bennett’s controversies caught Ward’s eye. Since then, the quarrel hasn’t stopped. In fact, a deleted tweet from Ward offered free nudes to anyone willing to block and report Bennett on Twitter late Tuesday.

Ward only recently reached nationwide attention after her efforts earned more than $1 million for the Australia wildfires. Bennett, on the other hand, has had a consistent viral presence for years. Her controversial interviews and conservative talking points have made her a star on pro-gun social media.

In a Tuesday tweet, Ward offered up a whole new kind of philanthropy. The now-deleted tweet informed her followers that Ward would provide one free nude to anyone who blocked and reported Bennett. By Wednesday morning, it had been deleted, likely because it could be seen as in violation of Twitter’s targeted harassment rules.

Kent State gun girl vs. the Naked Philanthropist, a history

An argument between the two began in mid-January after Bennett’s interviews during the 2020 Women’s March went viral. In response to the heaps of circulating videos of Bennett confronting marchers, Ward fired off the first shot, which has since been deleted. Bennett wasted no time in responding. “You should start a campaign to get yourself some clothes and therapy, whore,” she wrote.

Within 30 minutes, Ward had a response of her own. “I volunteer my white privilege for a good cause and that is to throw hands on Kaitlin Bennett,” she wrote.

Things continued to escalate. In a since-deleted tweet, she wrote: “You’re an un-potty trained, transphobic, homophobic, clinically insane racist bitch who harassed people but carries a gun because you’re scared,” she wrote. “And you think calling me a whore will get your brownie points? Sit down you redneck ass bitch.”

Ward later alluded to a rumor that Bennett once accidentally defecated herself at a party. “I raised millions of dollars to help people and all you’ve done is shit your pants and bully people,” she said. “Don’t ever come for me again poo poo bitch.”

But since the tweet disappeared late Tuesday, the fight seems to have fizzled. Considering the history between the two, however, the drama is likely far from over.

We’ve reached out to both.