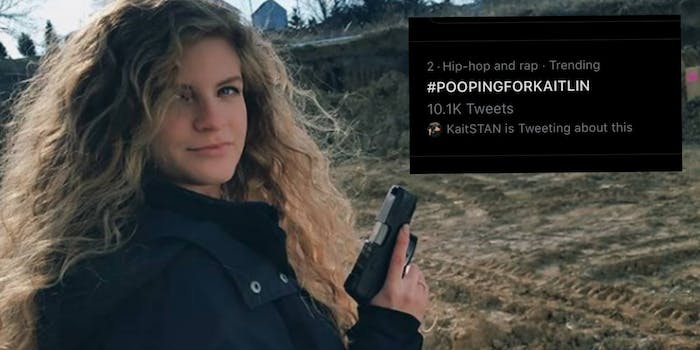 The movement references a viral rumor that Kaitlin Bennett once soiled herself at a party.

Kaitlin Bennett, better known online as Kent State gun girl, found herself at the center of a viral hashtag on Twitter Wednesday related to feces.

The hashtag, #POOPINGFORKAITLIN, references a photo that surfaced last winter which alleged to show Bennett passed out at a party covered in her own excrement.

The conservative activist, who has been accused of anti-semitism, seems to have drawn the attention of Twitter after calling for an armed insurrection at colleges this week over being booed during a visit to Ohio University.

And just like that, #POOPINGFORKAITLIN was born. The hasthag quickly went viral and became a top trend on Twitter.

Me: Stop giving kaitlin bennett attention it's how she thrives.

But the hashtag wasn’t just used by those interested in politics. THe hashtag caught the eye of K-Pop stans, who wound up pushing it, causing #POOPINGFORKAITLIN to trend under the “Hip-hop and rap” label.

WE DID IT KAITSTAINS!!!! #POOPINGFORKAITLIN IS THE NUMBER 2 TREND IN THE COUNTRY! LOVE YOU @KaitMarieox!! WE ARE ALL SHITTING FOR YOU! pic.twitter.com/t7BHaz3KkO

everyone on twitter when they see #POOPINGFORKAITLIN trending remembering she actually shit herself at a college party pic.twitter.com/BGeBIYcusY

Anything and everything poop-related from popular culture, whether movies or popular memes, was also used to keep the hashtag on top.

BREAKING: Gun activist Kaitlin Bennett makes a public appeal to President Trump on Fox news – while sh*tting herself at a party…. again.#POOPINGFORKAITLIN pic.twitter.com/7CrlacvgXf

Amazingly, the hashtag wasn’t the only drama facing Bennett. The gun girl also found herself embroiled in a Twitter beef with Kaylen Ward, known online as the “naked philanthropist.”

Ward recently garnered worldwide attention for raising $1 million for the Australia wildfires by offering free nude photos to anyone who would donate to the cause.

On Tuesday, Ward offered the same reward in a now-deleted tweet to anyone willing to both block and report Bennett. The gun girl responded to Ward by calling her a “whore.”

“You should start a campaign to get yourself some clothes and therapy, whore,” Bennett tweeted.

You should start a campaign to get yourself some clothes and therapy, whore https://t.co/c5hb0OqviR