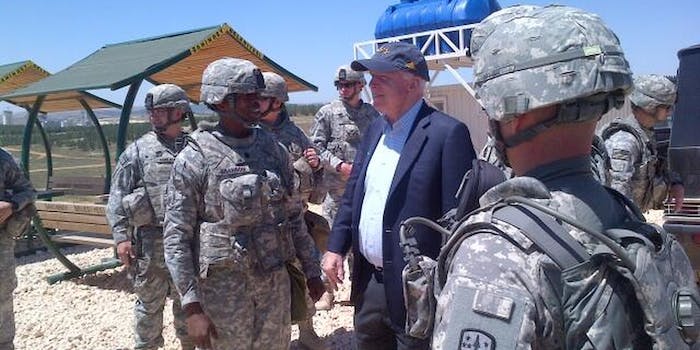 Meghan McCain learned on Twitter that her dad was in Syria

Many families keep each other up to date through phone calls and a chat over tea on Sunday afternoons. The McCains need to keep a close eye on Twitter to learn what’s going on.

Meghan McCain learned through the community that her father, Senator John McCain, met with rebel leaders in Syria Monday.

Nothing quite like finding out via twitter that my father secretly snuck into Syria and met with rebel leaders.

And that last tweet was meant in love – my father is one of the last remaining badasses around and I am endlessly proud to be his daughter.

The former Republican presidential candidate spent several hours in the country, according to Reuters, having slipped across the border from Turkey.

McCain has advocated for U.S. aid to Syrian rebels in recent months, claiming the cost of doing nothing outweighs that of assisting government opponents. More than 80,000 are believed to have died to date in the two-year civil war.

A U.S. Senate panel voted last week to provide weapons to rebels. Though, as Reuters notes, the Pentagon is worried with President Bashar al-Assad’s ability to target aircraft with surface-to-air missiles.

The U.S. government increased aid to the countries but has not given military assistance to rebels. President Barack Obama is concerned over putting U.S. forces on the ground just as the military readies to leave Afghanistan.

McCain’s visit to rebel leaders may pressure the government into action.

“The visit of Senator McCain to Syria is very important and very useful especially at this time,” General Salem Idris, leader of the Supreme Military Council of the Free Syrian Army, told the Daily Beast. “We need American help to have change on the ground; we are now in a very critical situation.”

The rebels have increased efforts to convince the U.S. to assist, especially with air strikes, the installation of a no-fly zone, and heavy artillery.

Syria hasn’t been too far away from the consciousness of the West, especially with regards to Twitter. In recent months, pro-Assad group the Syrian Electronic Army has compromised a number of Twitter accounts of media and other organizations it deems as rebel sympathizers.

Among them are the Telegraph, the Associated Press, BBC Weather, NPR, France 24, Agence France-Presse, CBS News, FIFA, and the Guardian.

Perhaps McCain has just bumped himself up to the SEA’s new No. 1 target.