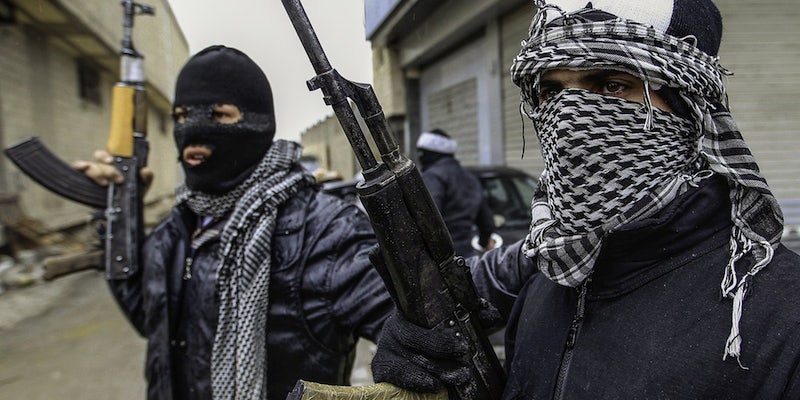 The Syrian civil war is spilling over into Twitter hacks of targets like the Qatari Foundation and Agence France-Press.

Hackers commandeered the Qatar Foundation’s Twitter and Facebook accounts early Friday morning, turning both into mouthpieces of pro-Syrian propaganda. The Syrian Electronic Army (SEA), a shadowy group of pro-government hackers that operates as an unofficial arm of the Syrian military, immediately claimed responsibility for the attack on Twitter. On Wednesday, the same group briefly took over the Twitter feed for Agence France-Press.

The SEA quickly made its motivations obvious. The Qatar Foundation, though semi-private, receives a large chunk of its funding from the Qatari government every year, and as such can be seen as a semi-official branch. In February, Qatar sent $100 million in aid to the Syrian resistance, which has been waging a bloody, two-year long war against  the forces of president Bashar el-Assad’s dictatorial regime. Qatar was also one of first states to recognize the rebel coalition as Syria’s legitimate government.

Once the hackers had wrested control of the foundation’s Facebook and Twitter accounts, they used the platforms to accuse the foundation of funding terrorist incursions into Syria. The foundation’s more than 200,000 social media followers were barraged with messages like this: 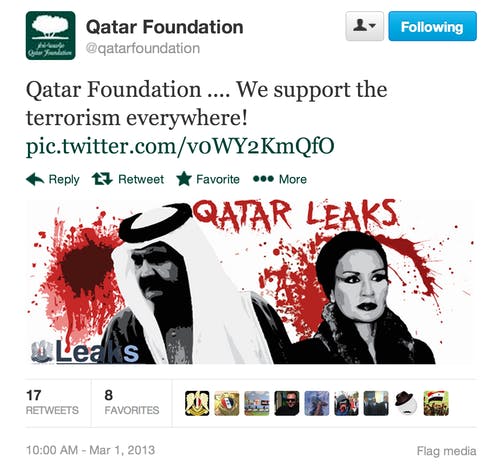 Followers watched tweets like that fill their feeds for more than three hours before the foundation finally regained control of its accounts. “Earlier today, Qatar Foundation’s social media channels were compromised,” it tweeted. “We have now addressed the issue and, as a precaution, taken related accounts offline.”

The attacks come on the heels of high-profile hacks against prominent Western brands like McDonalds and Jeep that called into question Twitter’s security protocols. For its part, Twitter suggested the blame lies mostly with users, who choose poor passwords or aren’t careful when clicking on links meant to fish for account info.