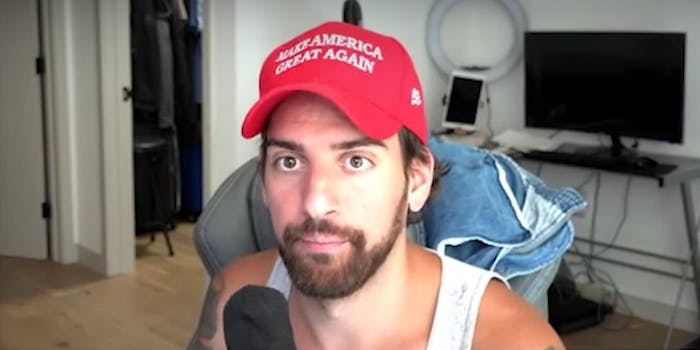 In a statement to the Daily Dot, a Twitter spokesperson confirmed that Saladino’s suspension was made in response to violations of the site’s rules.

“The account was permanently suspended for repeated violations of our platform manipulation and spam policy,” the spokesperson said.

While it remains uncertain what specifically spurred the suspension, a look at Saladino’s profile on the Internet Archive shows the online figure repeatedly sending out links to his recently formed podcast The Raging Patriot.

Saladino, who boasted more than 273,000 followers prior to his suspension, has attempted to make the switch from YouTuber to pro-Trump personality over the last few years.

Despite a failed congressional run in New York, Saladino has continued in his attempts to rebrand himself as a conservative thinker.

The Daily Dot reached out to Saladino for comment on his suspension but did not receive a response by press time.

Saladino responded to the suspension in a video on YouTube, in which he admitted to using Twitter to send users to his podcast.

“This screws me up because I was getting almost 200 million impressions on my Twitter each month, gaining probably 50 to 60 thousand followers a month recently,” Saladino claimed. “And I was using all of those followers, pushing them over to this YouTube account, pushing them over to my podcast, and now guess what? I’m screwed. Because I’m not going to be able to grow anymore. I was relying on Twitter for my growth.”

Saladino went on to add that he would pursue a lawsuit against Twitter if his account was not reinstated.