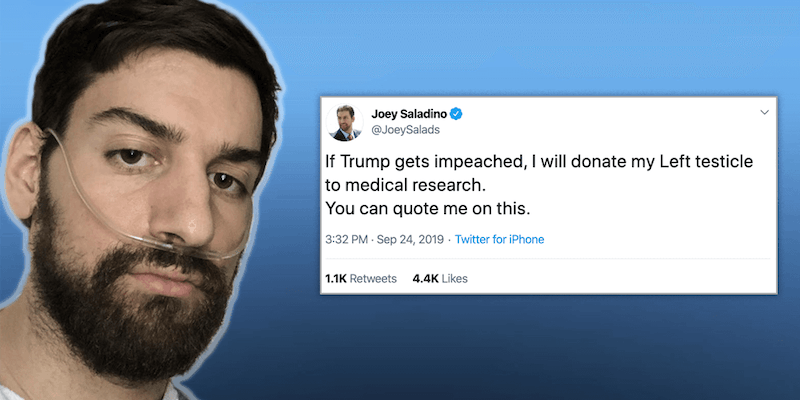 YouTube prankster turned conservative talking head Joey “Salads” Saladino is attempting to convince the internet that he had his left testicle cut out.

In a statement on Twitter in September, Saladino vowed to have his testicle surgically removed if President Donald Trump was impeached.

“If Trump gets impeached, I will donate my Left testicle to medical research,” Saladino said at the time. “You can quote me on this.”

If Trump gets impeached, I will donate my Left testicle to medical research.
You can quote me on this.

On Wednesday evening, the House of Representatives voted in favor of several articles of impeachment against Trump, making him the third president in U.S. history to be impeached.

Not long after the announcement, Saladino claimed on Twitter that he had his left testicle removed. His tweet also included a photo allegedly showing him in a hospital bed.

While it should be self-evident that the likelihood of Saladino being able to schedule a testicle removal procedure not even a few hours after the impeachment is incredibly unlikely, analysis of his photo by the Daily Dot also points to a clear troll.

The gown featured in the photo is identical to one used in the thumbnail for one of Saladino’s 2018 prank videos. A nasal cannula is also present in both the Twitter photo and the YouTube thumbnail.

When asked to provide details on his alleged testicle operation, Saladino referenced the Daily Dot to his tweet. When asked why his hospital gown matched the one in his YouTube video, Saladino declined to respond.

Saladino doubled down on the troll by tweeting a faux letter from the nonexistent “National Testicle Association.” The letter, complete with grammatical errors and signed by “Dick N’Bawlz,” thanked Saladino for offering up the testicle.

It’s safe to say that despite losing the bet, Saladino won’t be giving up his left testicle anytime soon.