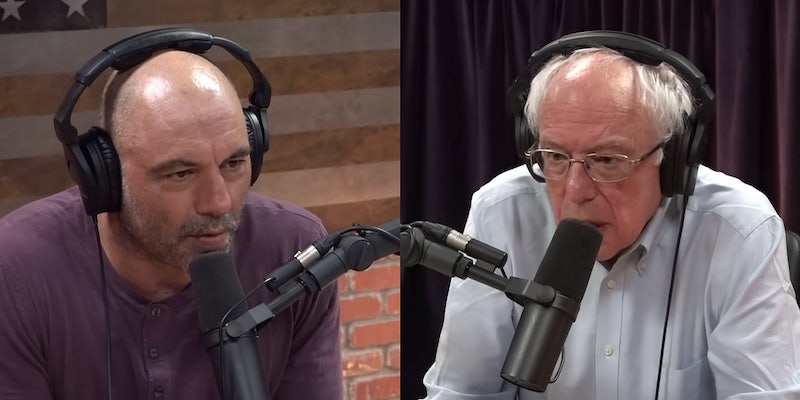 People are not happy Rogan is on the Bernie train.

Several days ago, on his immensely popular podcast, Joe Rogan said that he would “probably” vote for Sen. Bernie Sanders (I-Vt.) in the Democratic primary.

That rather mild endorsement passed without much attention in the following few days. But last night, Sanders tweeted a clip of the interview.

“I think I'll probably vote for Bernie… He’s been insanely consistent his entire life. He’s basically been saying the same thing, been for the same thing his whole life. And that in and of itself is a very powerful structure to operate from.” -Joe Rogan pic.twitter.com/fuQP0KwGGI

Sharing the clip sparked fierce criticism. Over the past two weeks, in the wake of the reports of his private conversations with Sen. Elizabeth Warren (D-Mass.) about a woman president, more center-leaning Democrats have revived the accusations of sexism against Sanders and his campaign that circled around his 2016 run.

That conversation was flamed when Hillary Clinton in an interview called out Bernie Bros for their behavior online.

Rogan himself has faced a bevy of criticisms, often being called a gateway to the far-right, as he’s hosted numerous figureheads in the movement on his podcast.

His podcast has also received its own sexism criticisms, as he disproportionately has men as guests.

Given the perfect compliment of factors, the endorsement was ripe for criticism from anybody but Bernie Democrats.

That sentiment was echoed across the social media platform, especially by women, as the endorsement became the top trending topic.

Don’t mind me I’m just watching white ppl who maligned HRC for supporting Goldwater when she was 17 and still living at home cream their jeans over Joe Rogan, endorsing Bernie Sanders https://t.co/E5fCbj6aFK

His endorsement of Bernie is an embarrassment, not a point of pride. https://t.co/KTnzP6ODCa

Joe Rogan is a sexist bigot, who regularly gives a platform to the alt right to sell his anger and hate-there is no argument that justifies this as a good decision and yet again, women and minorities will pay the price for it.

When someone shows you who they are, believe them. https://t.co/w6As2BYjIy

Bernie's willingness to amplify the endorsement of an unapologetically transphobic person is another reason why I can't support him. Bernie's premise that identity politics are secondary to economic issues shows a basic blind spot that comes from straight white CIS male privilege https://t.co/Ix2IMic6CM

Joe Rogan is openly transphobic, regularly makes racist comments, and gushes over bigoted guests on his podcasts. It reflects poorly on Bernie that he touts this endorsement as something to be proud of. https://t.co/RqveHVR0i1

The counterargument was also made, that Sanders has a unique ability among the Democratic electorate to attract the kind of voters who may have chosen Trump in 2016.

And that those voters are the exact kind of people who would listen to Rogan.

part of sanders anti-establishmentism wraps in that disaffected dude vote that Rogan is a leading voice of. it's part his electability case. but it is telling who Sanders fans are willing to bend the rules for https://t.co/X7RMprq1U5

Rogan is a part of our politics and has millions of people who listen to him. Nothing you do can change that. You can either have him in the Sanders tent in conversation with people with decent values or cast him out into the arms of Trump. The latter will do far more harm.

All that said, Rogan lives in California, which has a closed primary. It’s not clear if he’s a registered Democrat, so he may not even be able to vote for Sanders if he wanted to.